HOW TO RESTORE A VULCAN BOMBER, WELL HELP WITH IT!

I have been so excited over the last few days, as on the spur of the moment I contacted a friend who work (volunteers) at the AVRO Heritage Museum, Woodford about helping on the project and she suggested I came the following day. I had been hanging on not knowing when I could come because of my Mum's hospital appointment.

The weather couldn't have been worse - it was bucketing down and I could hardly see the hills as I drove the long track around to the museum from the Gatehouse.

Do click on the pictures to see some of the detail on the plane. 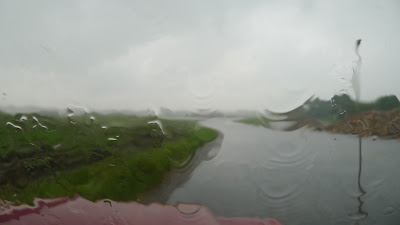 I had to climb up a huge ladder, safely tied up with rope to the scaffold and was given a fancy rubbing down thing, like a plastic holder on Velcro with a stick on sanding pad. Very effective used with a bit of water. I was standing on the wing! Woo hoo! The closest I will get to being a Breitling Wingwalker. It was so exciting! When I looked at the enormity of the project I thought it was an impossible task. We all set to doing our various bits and owning a section (I had bagged the RAF roundel as part of my work). I was working in a triangular shape from a narrow top opening out to the back of the port wing. The wing sections in between the rivets were just under or about 2ft. We didn't only have to sand, we had to get it to feel smooth to the touch and there was lots of camouflage paint on there which was very gritty. About 30 rubs each way had to be done before the surface was satisfactory to provide a surface for preparation/painting. Then every so often we'd grab a pressure washer (great fun, particularly when you wanted to give someone a wee shower!!!!! HAHAHA) NB: No humans were drowned in this operation and it was under cover as well 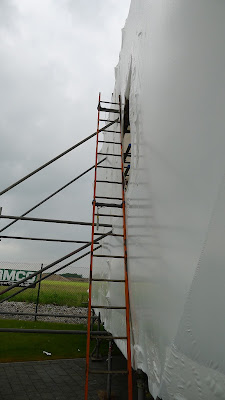 Of course you have to have your photo taken in strategic places, this is a once in a lifetime opportunity!


I went back there the next day for a bit more scrubbing - I took some more photos and might add some at a later date. Some of the volunteers from museum seem to think I am part of the furniture, every opportunity I get, I seem to make for there.

Once again, I am sorry if I am boring people with the Vulcan offerings, but it is very important to me and I am so proud to have had a hand in the restoration of this beautiful plane. There will be more work done next week, I hope to get over there one of the days.
.