CULTURE, CURRY AND VALENTINE'S DAY TOO.

My friend had emailed me to say she was coming down from the NE to visit her sister as her husband was doing a show at The Whitworth Art Gallery on Valentines day, would you believe. We don't pander to that occasion, so I had no problem with saying I'd join them. I have passed that building many times but never been there. The most simple arrangement was that I should get a train to Oxford Road and a bus up to the Whitworth, as we would be walking up to Rusholme later.

Whilst waiting for the bus near the station, I heard a hoot, then realised a steam engine was passing overhead on the line I had just travelled on. There were two lovely steam engines and a row of carriages. I didn't have time to get my camera or phone out to take a shot. If only I'd stayed in the station a little longer I would have seen them go through towards Piccadilly.

Walking past The Academy at the University I stepped back to take a better photo of Holy Name Church across the road, when I fell flying as I hadn't realised there was a kerb behind me with raised bike racks. I hurt my upper arm as I fell with that on the iron bar. Good job it wasn't my head! The wounded soldier hobbled along the rest of the way and met up with my friends in the cafe bar at The Whitworth, which is a long room with floor to ceiling windows. I passed through a gallery where my friend's husband was telling stories to children, dressed up as a entertainer, knee length wide velvet coat and other items of clothing rather like a wandering minstrel. I forgot to take a picture as I didn't want to disturb his act as he might have noticed me taking a picture.

Coffee and cake 10/10. We had a walk around the gallery, I like to paint/draw a bit but am not really interested in things that don't look like what they're supposed to look. There were lots of photos relating to the period after the war when life was drab and the process involved in 'brightening' up the country. There was also a display behind glass of a robe which I believe was from the 6th century? There others and also a very fine hand knitted tunic in silk which dated from I can't remember but was extremely old. I enjoyed that. I'm just going to show you a few pictures to show you rather than go on at too great a length, as if you're interested you can look up The Whitworth on the internet. 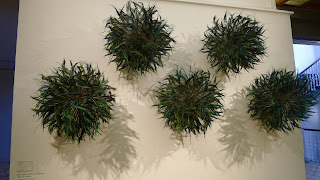 I was amazed just how much there was for young children, the entrance hall was absolutely chock full of push chairs, there was story telling, painting, flower making and this paper patchwork. Apparently you have to book early as the sessions fill up fast. It's free too I believe.

There was also a shop downstairs which sold all sorts of interesting things, lovely wooden toys and books for children.

We then walked up to Rusholme to find a few recommended Indian restaurants, came back, didn't find the one we wanted, had a meal in another, then found the one we should have gone to afterwards. It was very nice the one we went to. We had three different vegetarian dishes and shared them between us so we had a lovely selection. We didn't have a dessert and really it was pretty cheap, about £9 each which was amazing for Manchester. There was a funny sign outside the restaurant we wanted to go to, apparently recommended by Nigel Slater. 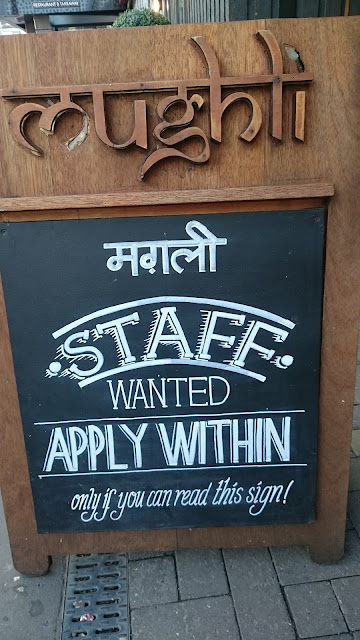 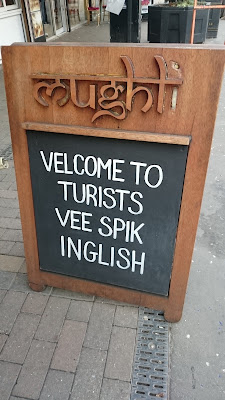 Well, we had a nice visit to the gallery, a tasty meal, lots of chatting as I don't see her and her sister very often and I hoped to read on the train home. However, it wasn't possible as I was absolutely jammed into a corner, the train was so full.

So that's all for today, until the next time. (Did you notice anything? No shots of Vulcans)