Hi there from a very damp but not now raining, North Cheshire, on Boxing Day. I hope you all had a very good Christmas, in the way you wanted to spend it and that means not subjecting yourself to untold toil in the kitchen when you didn't want to! I decided to speak up about this last year and as it was really our 'turn' to entertain at Christmas, decided that we wanted to stay at home. Our kitchen and dining 'alcove' are both very small and there's not much room either to entertain nor to cook multiple dishes and have dishes hanging around. I felt horribly guilty about this, as I do feel I 'ought' to offer but as I am now at the time of life I shouldn't be doing things I don't wish to do, took the bull by the horns. Don't know how it went down but there it is.

Yesterday we visited our son, daughter in law and little granddaughter, who is now nearly 15 months old. She's not quite experienced enough to open Christmas presents but she thought the curly wrapping tape was very interesting the way it sprung back when she pulled it. She did a lot of pulling a sausage dog which played music around, poor dog came off the road and was dragged sideways but she kept pulling. She loved pulling the cats tail but naturally, Dude didn't think much of it.


Then we went to visit my Mum, who thinks the same as we do and is happier to stay at home so long as we go to see her. She is very limited in her foot and probably eats less than granddaughter. We returned home at about 3.30 and then had our 'Christmas' dinner, quite a special Cottage Pie for husband and a veggie version of same with Quorn, for me. It is a recipe I found in Country Living magazine a few years ago and its called a perfect Ragu. I added some lentils to the recipe to give it a bit of crunch with the veggies in it too. Very nice - and better still, there are more of same in the freezer for another time.

I've been reading lots of Len Deighton spy books over the past few months - Game, Set and Match, then the two sets of three books which followed that trilogy. They are fascinating to read and as I've always been interested in the cold war and its stories, and in particular Eastern Germany, (as I visited there before the wall came down), they have keep me occupied. I just couldn't begin to resume them, as they're so complex. You probably can't buy them in book shops but Ebay - there are plenty opportunities.

I've also been re-reading a Joanne Harris book, Gentlemen & Players, a very dark tale of events centred around a boys' elite Grammar School. Strange things happening relating to an event 13 years or so ago. I love trying to work out who dunnit! but I admit to being stumped. There's always something you miss in a book like this. If you're a Joanne Harris fan and haven't read this - do so. 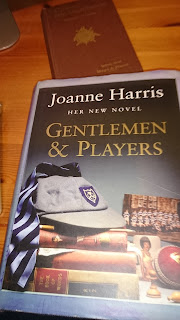 Now to the Beetle - I decided to give the Beetle a little drive the other day, Christmas Eve - it was a nice day, the sun was shining, it needed some fuel. As the poor thing has sat there for a couple of months without moving, well you've guessed it, she wouldn't start. Firing on three cylinders was mentioned (or was that me?) Well, it will need to be sorted as I can't have her breaking down on me even if we can get her going. Moral of the story, do not leave old cars there without exercising them every so often.

Well, this was an unplanned (???!!!) post, I was going to write one about a visit to AVRO Heritage Museum at Woodford, where we went last week and I took LOTS of photos - but that will have to wait until next time.

Next week a friend who has spent Christmas in Cyprus, is back in the Poynton area of Cheshire and I'm going over to see her at her sisters. Funnily enough that's really close to the AVRO museum but sadly it won't be open when I go. I wish you a very Happy, Healthy 2016.

If I follow your blogs, many apologies for my very intermittent comments, I just don't seem to have the opportunity to read blogs for ages and I have missed such a lot. I'll have to spend a few hours catching up with you.