A FLYING VISIT (NOT QUITE) TO THE ISLE OF MAN

Hah, another post! What am I playing at? Well, if I don't post now I will probably forget and there are a few nice photos.

After we returned from Leominster we went up to Blackpool to see the air show, particularly the Vulcan, another post about that at a later date. Husband had said he would go over to the Isle of Man to visit his Mum and step dad and also see his brother who had been in hospital for over six weeks with pneumonia. I said I wasn't going as I couldn't really leave my Mum for almost a whole week. However I relented and thought I'd leave it until the 11th hour, see how she was and then go over just for a couple of days on my own.

The day before I went, Mum seemed as well as expected so I booked my sailing on Manannan who sails from Liverpool and told husband to pick me up when she docked. The train I took to Liverpool was absolutely deserted once it had dropped off a lot of passengers at Warrington, it was the Transpennine express too - maybe everyone had gone where they were going to and it was a quiet part of the day. I was going to get a bus down to the Pier Head but a guy on the station told me I could get the underground almost to Pier Head. It was like going into the very deepest tubes in London but it was only two stops.

There are such a lot of new buildings down near the waterfront now, mixed in with the existing ones. I am not sure what some of them are - anyone who know, please let me know? I've put a few pictures on.

The sailing was as smooth as glass and we arrived on time at Douglas where husband was waiting for me. We were all going out to dinner that night at a pub/restaurant at Crosby. A good time was had by all and it was a treat for me as we don't eat out very often. Husband had already been to see his brother before meeting me. After the meal we drove over to Peel on the way back home and stood looking out to sea at the harbour. Apparently whales had been seen the other day in the distance. We didn't see any.

The next day we went for a little drive, visited Niarbyl which means Tail of Rocks in Manx Gaelic, where the tide was in. I have never seen the tide in there, every time it has been out and you can see the tail quite clearly. The white cottage is uninhabited but it was featured in a film about Ned (a lottery winner, and I can't remember the exact title). I brought back three flat rocks which had lovely vein markings on. We then went over to The Calf of Man, one of my very favourite places. I have been over to the Island on a little boat and it is really something like adventures of The Famous Five on a Treasure Island, that is if you have a good imagination and are still a bit of a child at heart. There currents there are very dangerous and we saw a yacht trying to go through The Sound but even though it had sails and engine power, it had to turn back. After tea and scones at the Sound Cafe, we went back towards Douglas to see his brother again at the hospital. We had to go shortly after an early tea, when I discovered I had left my favourite, new jacket (with the Vulcan badge on) at the hospital, as we had been kicked out of the room whilst they did some blood samples, we couldn't really go back and sit down because of the equipment and so I didn't go back to sit on the chair where my jacket was, so forgot it. After realising it, we had such a little time to go back to the hospital to collect that husband got away with driving very fast on a very windy road, me shutting my eyes as I hate driving fast, we made it, I ran down the corridors, retrieved my jacket and we were at the harbour in time.

I could go on about the journey but I won't, it's nothing special, a decent sailing over and then a very quiet drive back along the M6 from Heysham.

Here are a few photos: I hope you like them. Of course, when I started to take photos, I realised I'd flattened my battery at Blackpool air show and hadn't remembered my charger, so I took photos with my phone. I hope they're OK. 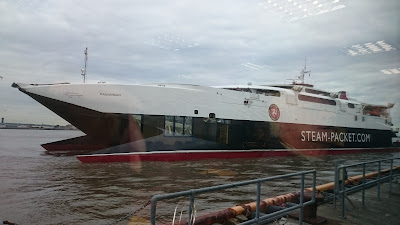