Oh my! What a stressful few days I have had since last Thursday. Husband has been feeling poorly for a while now and lacking any interest in much at all. Following a doctor's visit when he told her he thought it could be his heart again, because of irregular heartbeat, the doctor rang him to say she had found him an appointment at the emergency ward at the hospital, rather than going through the clinic or A&E mode.

We duly arrived and it was found that, yes, his heart was irregular and they would take him in overnight to do some tests. The next day, there was definitely something wrong and they were keeping him in. Well to cut a very long story short, he is likely to be in until weekend as they have wired him up to a machine, put him on some extra medications and will decide on the Warfarin route etc and maybe another stent might be fitted.

Husband is feeling a fraud so he says, and charming the nurses, as he does, and reading his Land Rover magazines and classic car magazines from cover to cover.

To cap it all, on the night he was admitted, we were there waiting for blood results and that takes a minimum of 2 hours to achieve a result. We were still unsure if he could come home at that point and I was worrying about the car as it is £3 for 5 hours. As we were waiting I missed the deadline by ten minutes and I wonder whether I will receive a letter. I had no idea how I could add another couple of £££s and by that time it was 12.20 midnight. Considering they allow you 30 minutes without paying I am hoping that they ignore the ten minutes. Still, even if I have to pay a fine, it is not the most important issue, is it? I would always fight my case though.

So I am camping out at home and seem to be dithering about doing not a great deal, I did think I would get all sorts done in the man-free zone, maybe later in the week.

Merlin the cat is still poorly. I am making a huge fuss of him but I really think it won't be long before we are saying goodbye to him. Poor lovely Merlin, he has been the light of our lives over the last 9 years or so.

I have been reading a book that I have been unable to put down but have made myself read only when I could sit and concentrate, as it is rather like those books you studied where you made notes of the characters and who they were in the scheme of the book. This one is called Brandenburg, (a novel), by Glenn Meade. The narrative goes from Germany, Holland, South America and briefly Italy (I think) and the plot is so complicated and compulsive to read, involving Neo Nazis and Intelligence Agencies and a much more sinister plot than anyone could imagine. If you like this sort of stuff, read it. I'm not going to divulge any more of the story. Whatever else I read now will be quite tame.

I am crocheting a poncho at the moment, which used to be a blanket and the sides seemed to have a life of their own. It's inspired by Attic24 blog but without the cowl neck, for which I have insufficient wool. Also I'm only doing a cluster of two trebles rather than three, making it less holey. 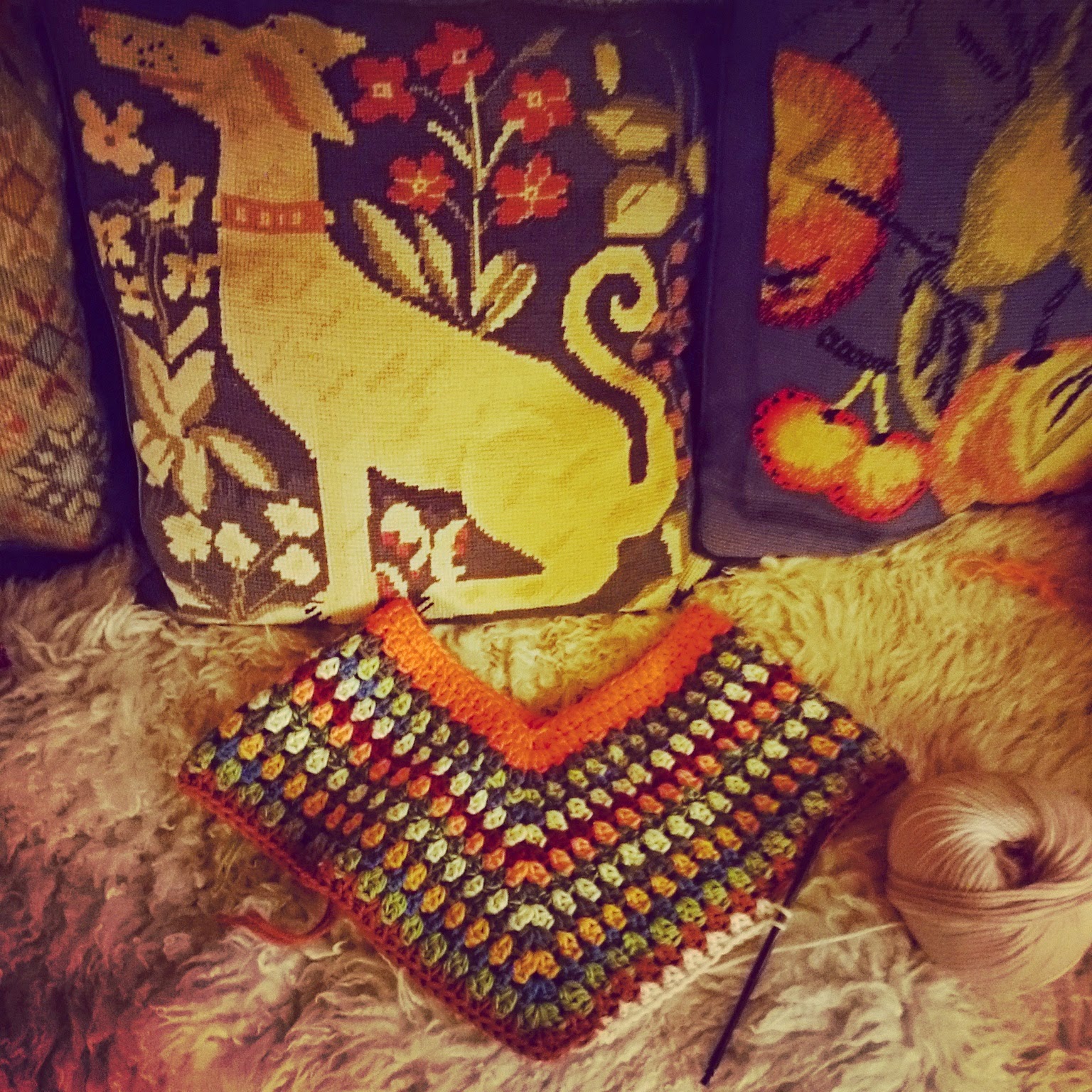 I have added quite a few more rows than the above but that's the latest photo.

My lovely daughter in law has just shown me this beautiful cowl she knitted from some wool I bought her for Christmas. She is not a regular knitter but she is absolutely delighted with this and wants to do another. Isn't she clever? She has also started doing patchwork, which is lovely and bought a sewing machine a few months ago. 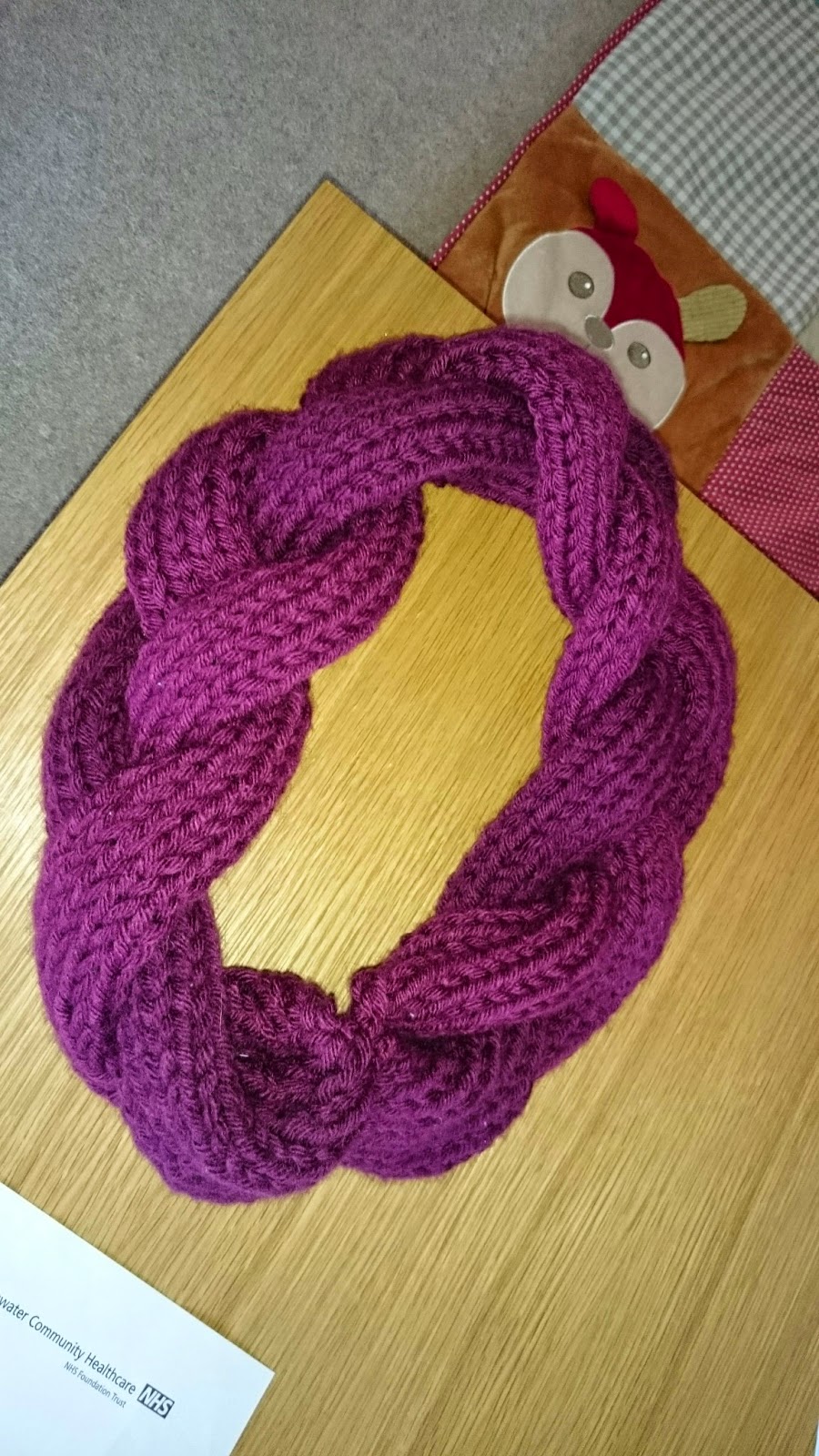 I was looking in my house the other day for stuff I wanted to clear out, as I need to declutter. I love things like Delft, cut glass, Spode plates, blue and white jars and large glass animals. I have selected some of my less loved Delft, some mugs, a glass owl, and am trying hard to decide on a cut glass decanter which is rather nice. Somehow I might not part with it although I have given a large cut glass bowl to our local Hospice shop. It is very hard and I am not given to following other peoples' blogs in getting rid of X number of items, just because so and so's blog is doing it.

I have probably said that I am not a great person for housework, I don't have regular routines but have splurges of activity. My vacuum cleaner is a fairly hefty Sebo which I have had about 25 years and I thought I'd like one of those cordless ones so I don't keep knocking things off with the vacuum wire. I could also whizz around my laminate floor and bathroom and kitchen without having to find the vac at the bottom of the understairs cupboard!  I bought an AEG one off Ebay, having looked at them in Curry's PC World. Apparently they have 60 minutes use time and 4 hours charge. It duly arrived the next day, I got it at a bargain price and then it suddenly went wrong after about 3 uses. It wouldn't charge up. I contacted the seller and thought he would ignore me as I had already left feedback for him. To my surprise, and it really touched me, he asked for the serial number, replying that some of them had issues and he would be sending me another one and not to bother with the one he had sent as it would be too expensive to return! I could have cried, one thing less to worry about. I really must leave him further feedback if I am able, as I am so pleased with the outcome (well, wait and see of the final one). There are after all some good people in this world.

That's all I can think of to write at the moment. My mother in law has just rung up to ask about husband's blocked ears and vertigo, so I told her he was in hospital. As she is in the Isle of Man, she will have to keep in contact by phone.