I did say I was going to do another blog, what an inefficient blogger I am. Not a lot happens in the winter to write about and generally I'm going through life, visiting Mum, crocheting or just doing everyday things. Unless the weather is good I just won't go out on the bike as it is supposed to be pleasure and I've gone through all that "I must go out and do so many miles" stage a long time ago. Mind you I will have to be a bit fitter if I'm going to go to the newly recovered York Rally in June. It has not been held for two years now and it has been missed but now a group of people have brought it back from the dead.

OK! I have now lost the buzz of my new project but I am going to show it to you. Somebody sent me a Lucet hook at Christmas and I had a go at it but the cords produced were very thin and unless I needed to hang something up or make a fastening for something, not much use to me. I had the idea that if I used something much chunkier with very thick wool I could use the same principle to make something much more interesting to me. 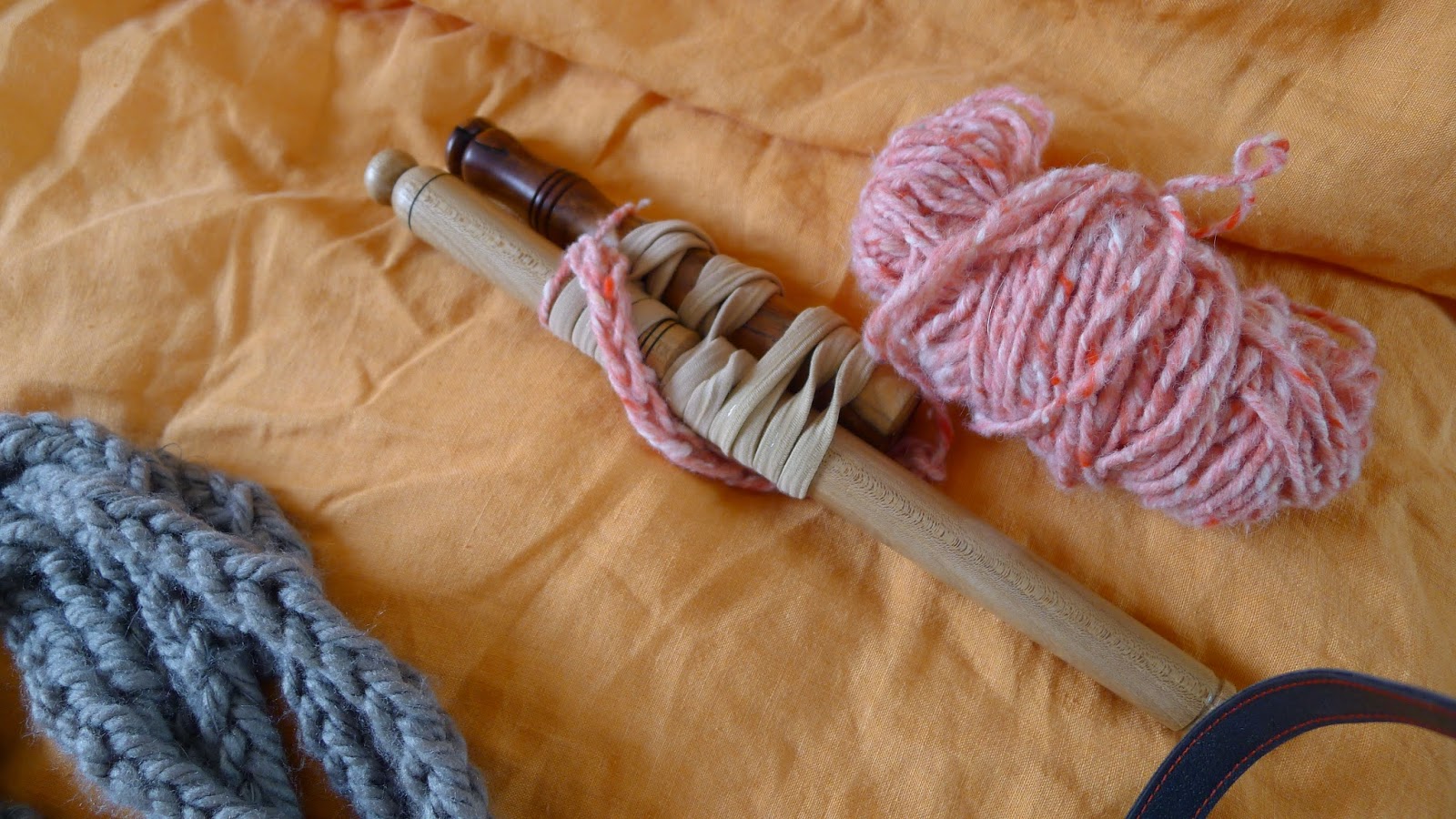 Which was a Nostepenne and a singing bowl stick secured together. Not particularly pretty but seemed to do the job and so after a bit of work, the end result (well nearly) is this: 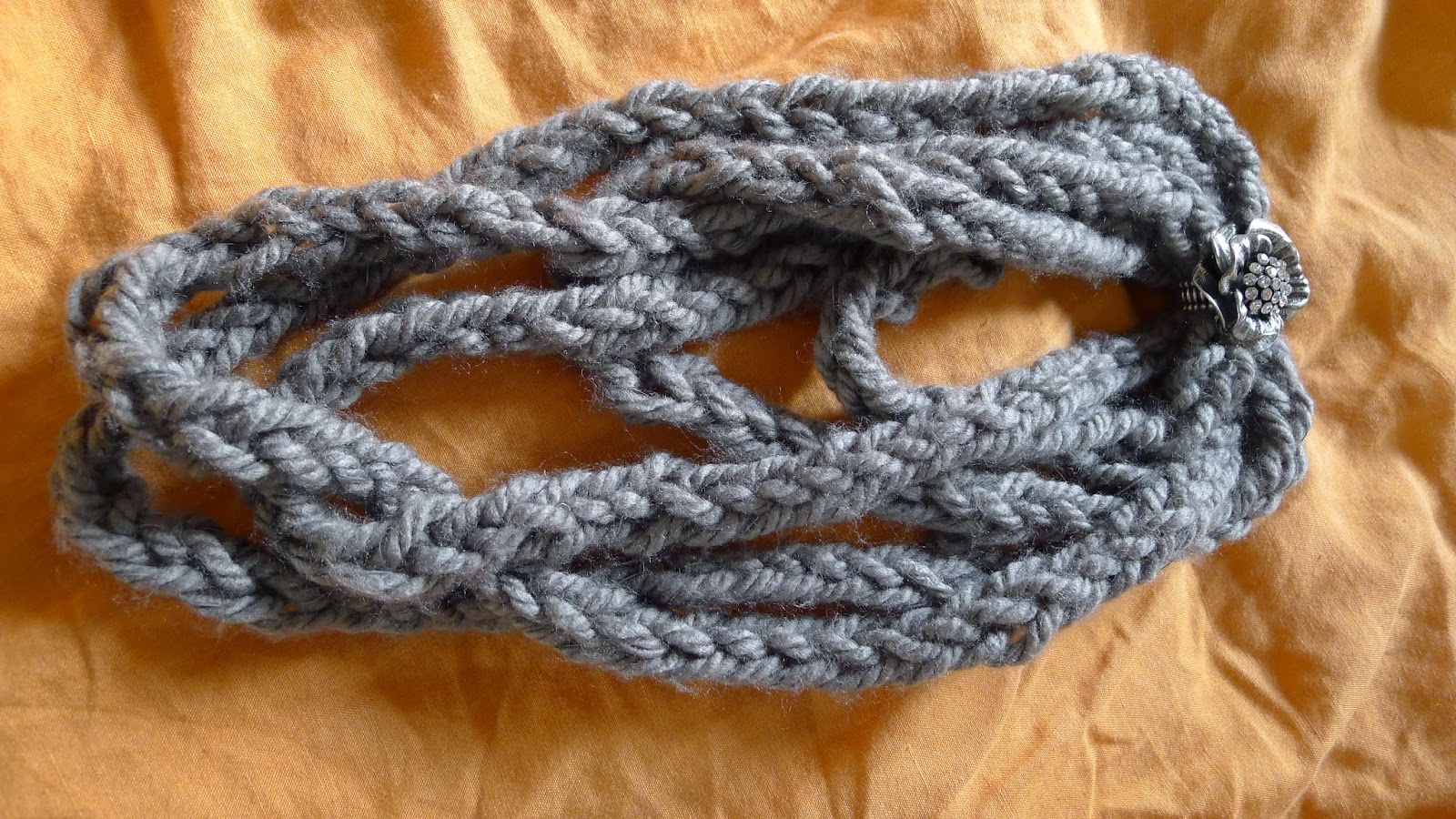 It is a sort of scarf but mainly for decoration. I was using some leftover chunky wool which is for hats and has a reflective strip in and when the light shines on it it is quite impressive. 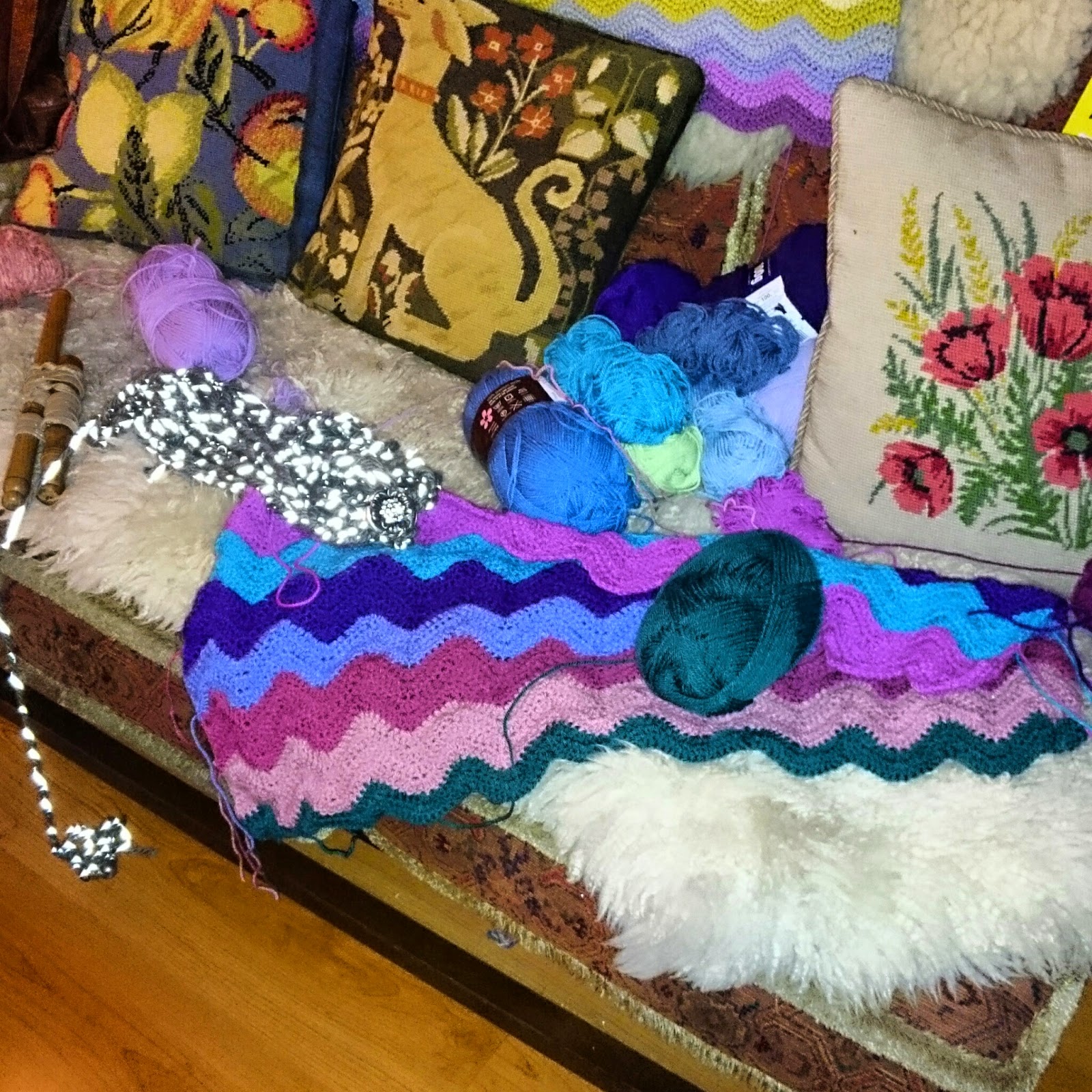 That is the result, the white looking article on the left of the blanket I am doing. That was the only superchunky yarn I had so used that but I am going to finish it off with a band with metallic beads on.

I'm quite pleased with the result but when I first did it I was so excited I had to go to Black Sheep Wools and show it to them.

It was my birthday the other day and I had a busy day running errands and having visitors but I don't really bother about doing something special, at my age it's just another birthday sadly too many of them, although there are people who would love to be able to reach my age and aren't going to, so I am not grumbling. We can't change it and that's that.

My Mum decided to give up her car and I was thinking of taking it over and insuring and taxing it but as she had been having problems with the electrics, she wouldn't let me have it and asked the garage to take it, saying she didn't want me to be landed with the expense. Old 'new' cars are expensive to repair owing to the electronics in them, whereas old 'old' cars, like my Beetle and old Landy, are still expensive but more easily fixable as there are fewer electronic devices in them. She had hers from new and it is now only worth about £300, as it had a few scrapes on the wing, mainly as it's very awkward getting in and out of her drive. So, that means I will be Mum's taxi.  I didn't want her to give it up as it was her independence but the problems with it were putting her off driving it. I'm so glad I didn't buy a new car when she did as she wanted me to, otherwise I would have been in the same boat. I instead saved the money and what I have now won't depreciate like a new car.

I think that's all on the creativity front. I have tried to get out and about in Beetle a few times now the weather has been drier, it's not good in the rain as it tends to get steamed up even when eventually the screen heater gets going. It's also better on the passenger side than the driver's side, being originally designed to be left hand drive.