I was going to visit Southport on my own as husband was going to show a car at Event City at Manchester. However, someone had made a mistake and he decided to come with me instead. We wanted to park on the beach so had to approach Southport from the North in order to be admitted there. A very early start, quite a bit of queueing, even though we were very early but the ramp built on the soft part of the beach had slipped, so we had to wait for that to be fixed. We would have been OK in Keith's Disco but most cars wouldn't.

On the Saturday the weather was dull. It got so bad and the wind got up later. Once again, we were disappointed that Vulcan did not display. It was too bad for the plane to be able to land safely. I tended to lose interest after that and didn't pay as much attention as I ought to have done to the Blades display team. As there are so many photos, I'm not going to go through Saturday as well as Sunday, so just posting the top one of the sky over the water with the sun just peeping through. The plane in the foreground is a large model!

Then there was the announcement that Vulcan was going to come on the following day! Right, I was going to go anyway! Husband asked if I wanted to and so we both came again. What a change in the weather, it was perfect. There were so many people on the beach that day, it was absolutely crowded. 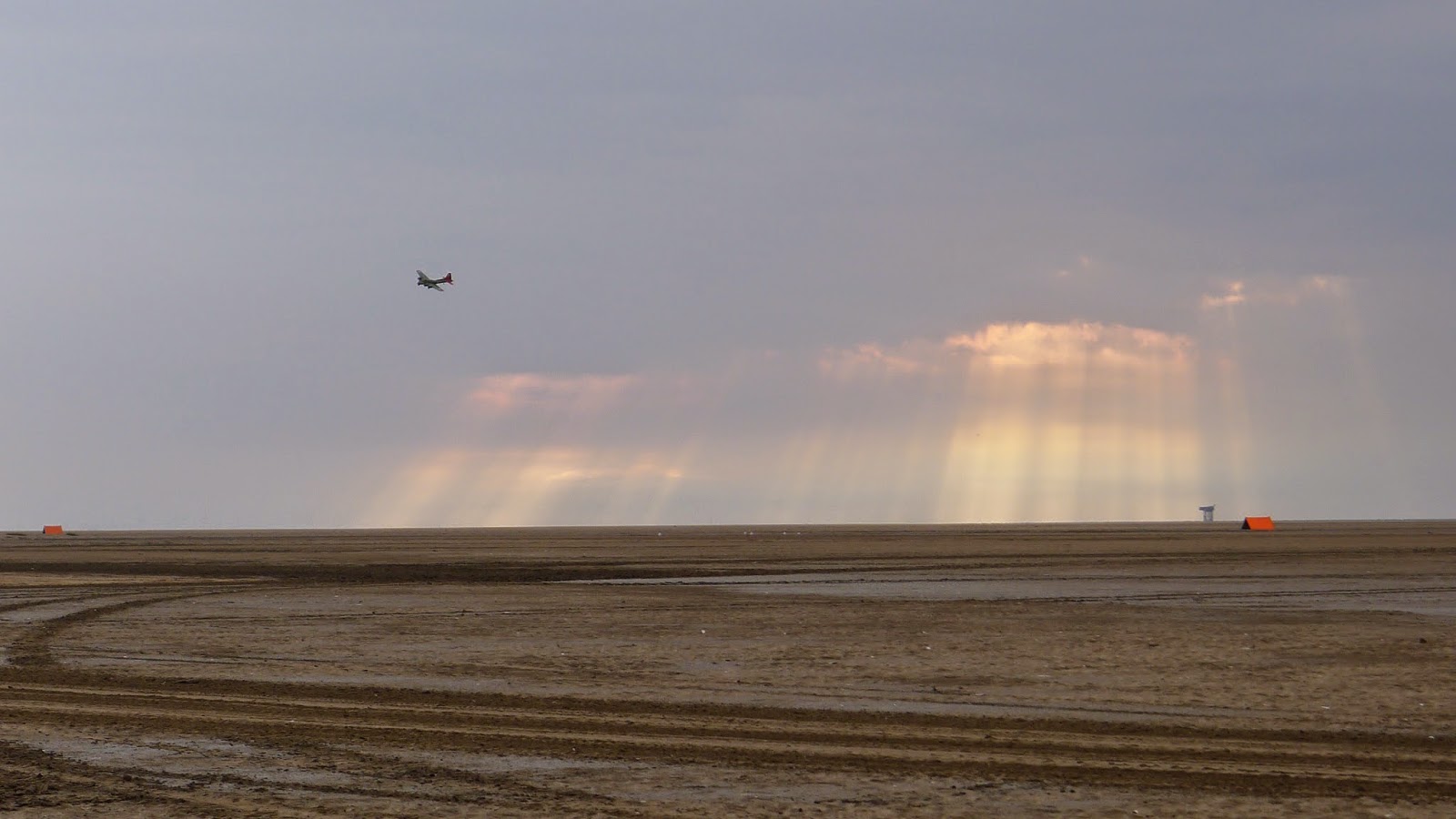 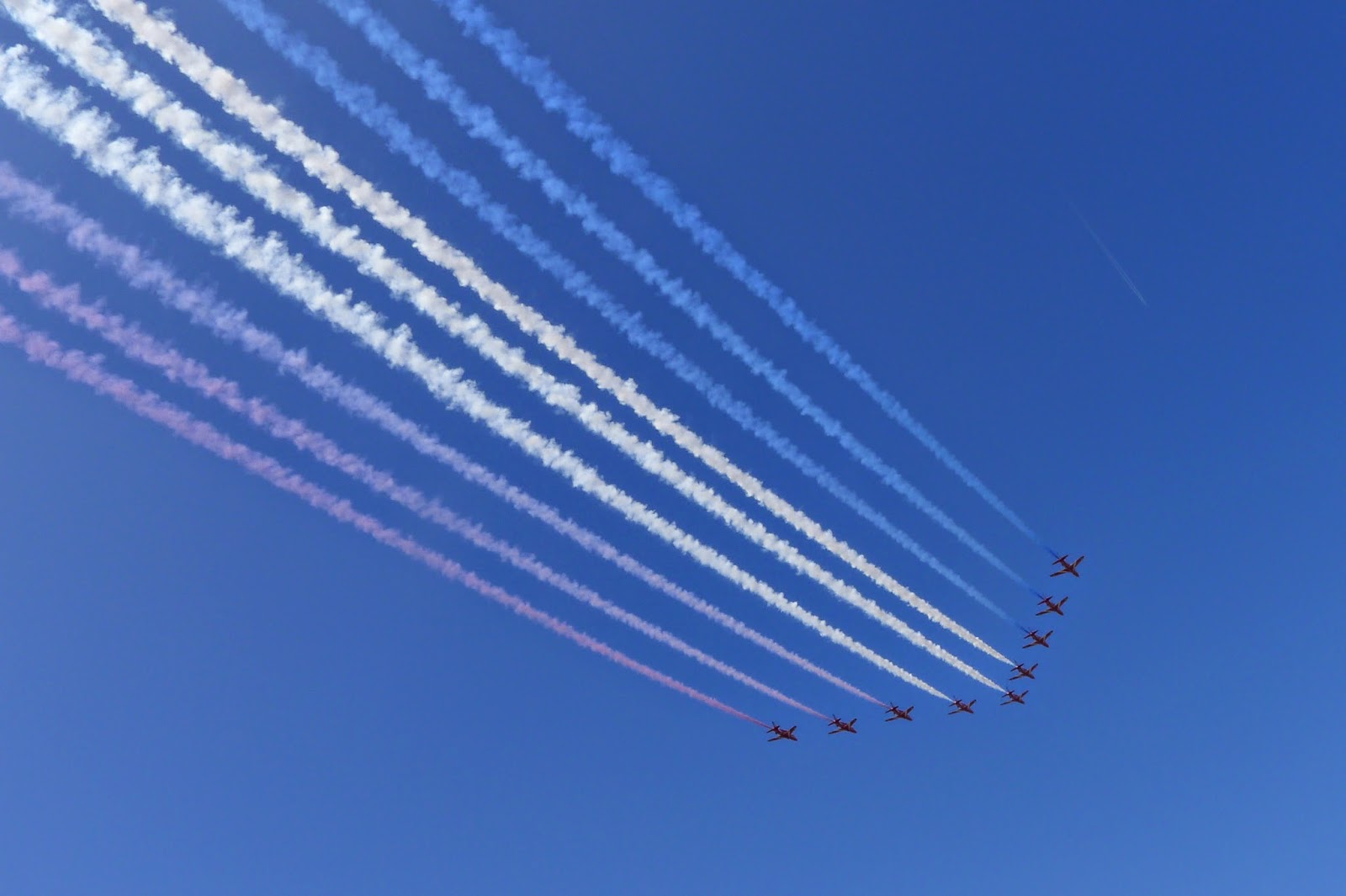 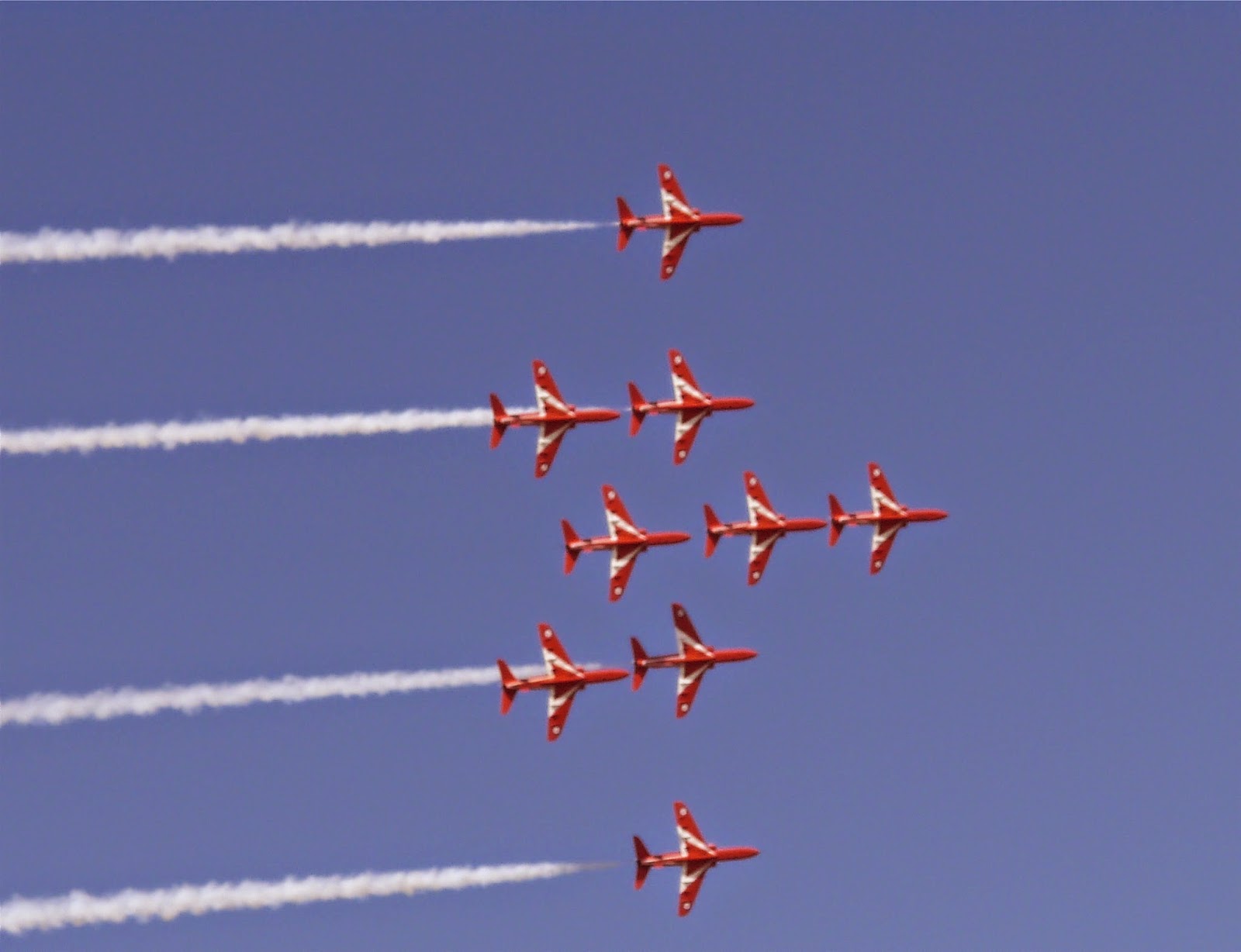 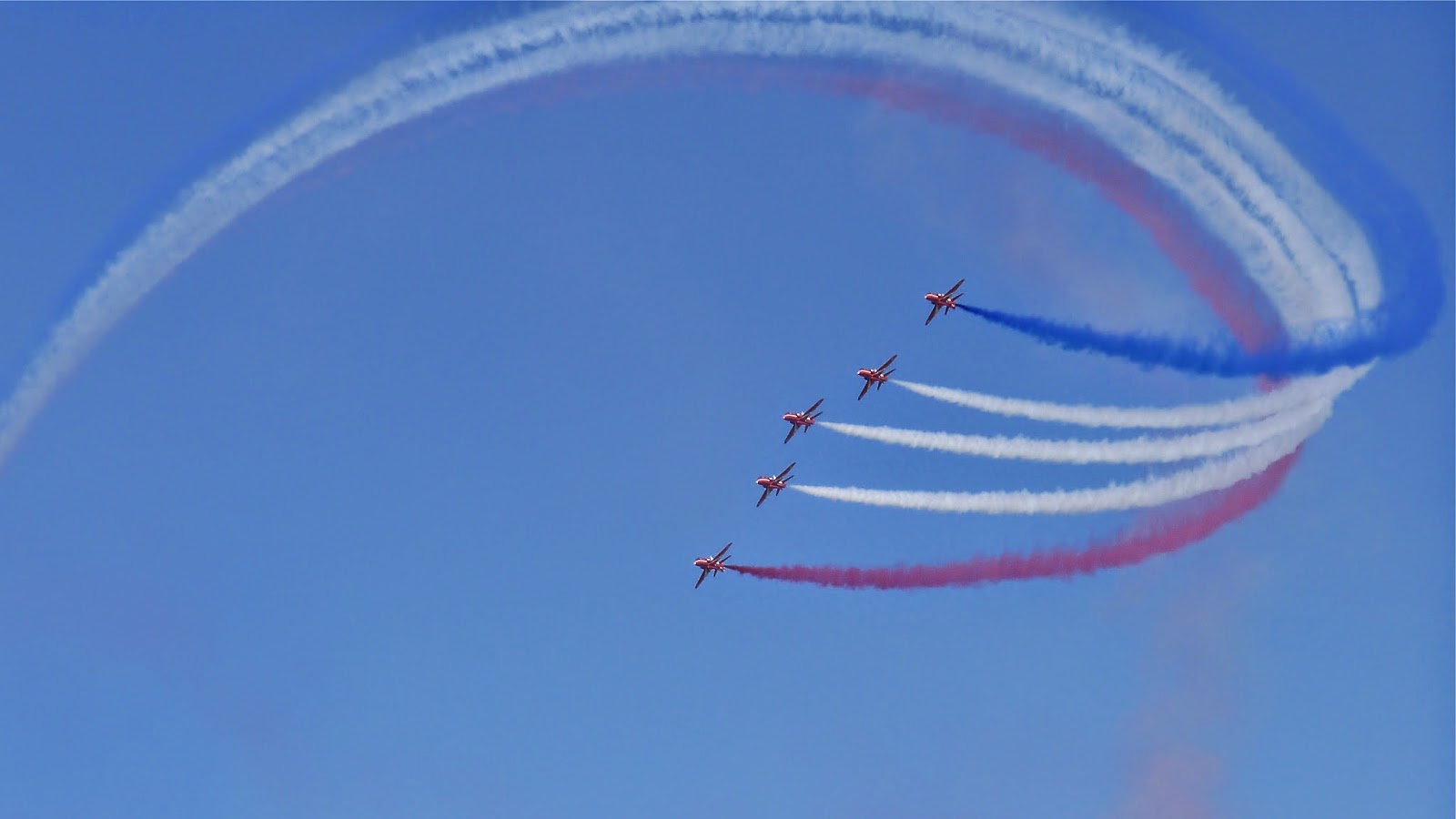 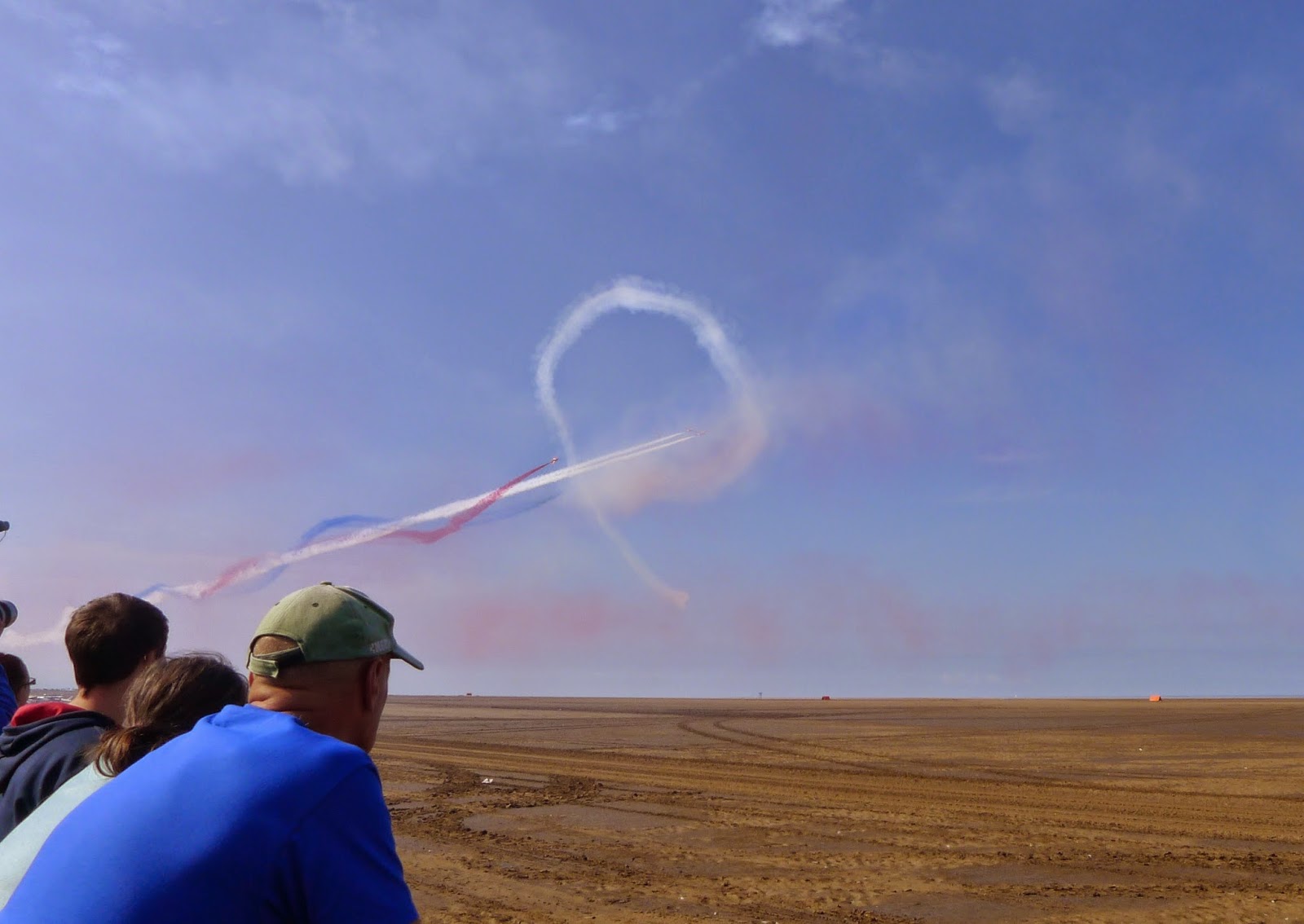 The wonderful Red Arrows. Because of the  better weather they were able to fly higher and do more stunts than they did on the previous day. It was very thrilling watching them. 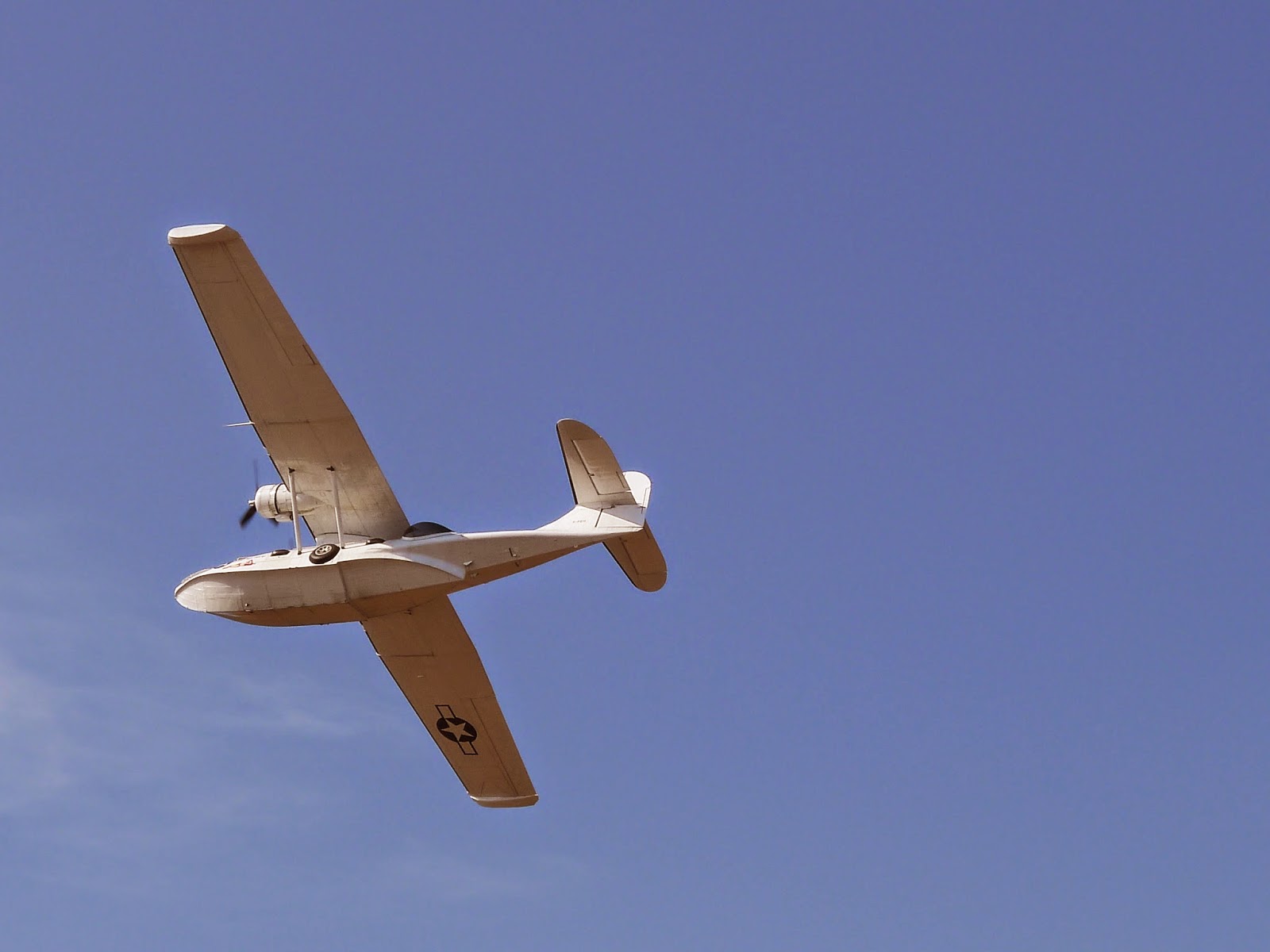 This is the beautiful Catalina Flying Boat. It had such a quiet engine and I loved it. 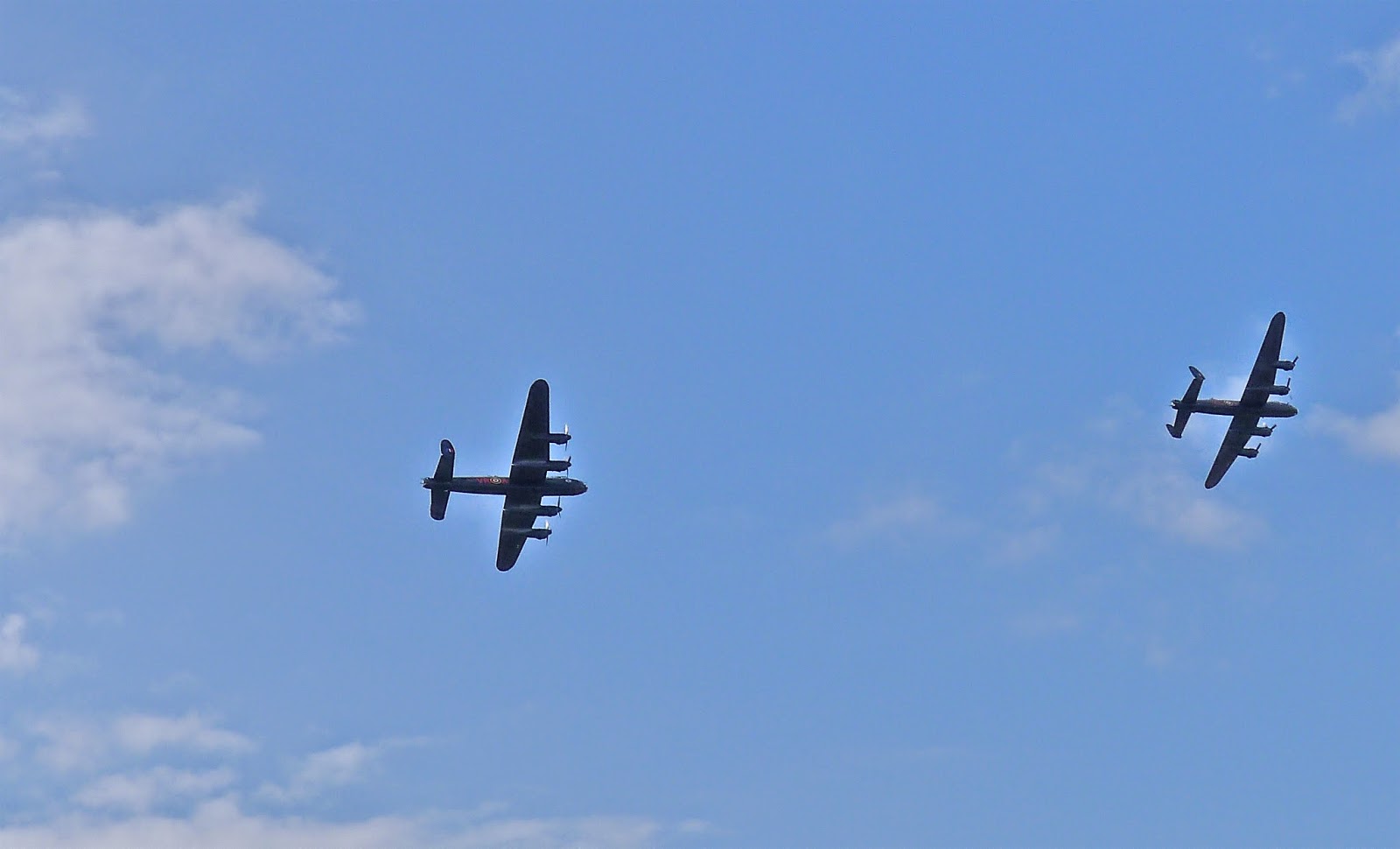 And so, to the highlight of the show for us. What I have been waiting for and missed at Blackpool and the previous day. I could hardly contain myself with excitement.

The Lancasters were over from Canada to make a tour of the country and display at quite a few air shows, in addition to going over Ladybower (I think) on their way back, where they used to train to drop the bombs for the Dam Buster raids. They were magnificent, and I actually cried when they came past, I was so moved as my Dad was in Air Crew in one as a navigator. I got quite upset, as I must admit, did quite a few other people, not only women. 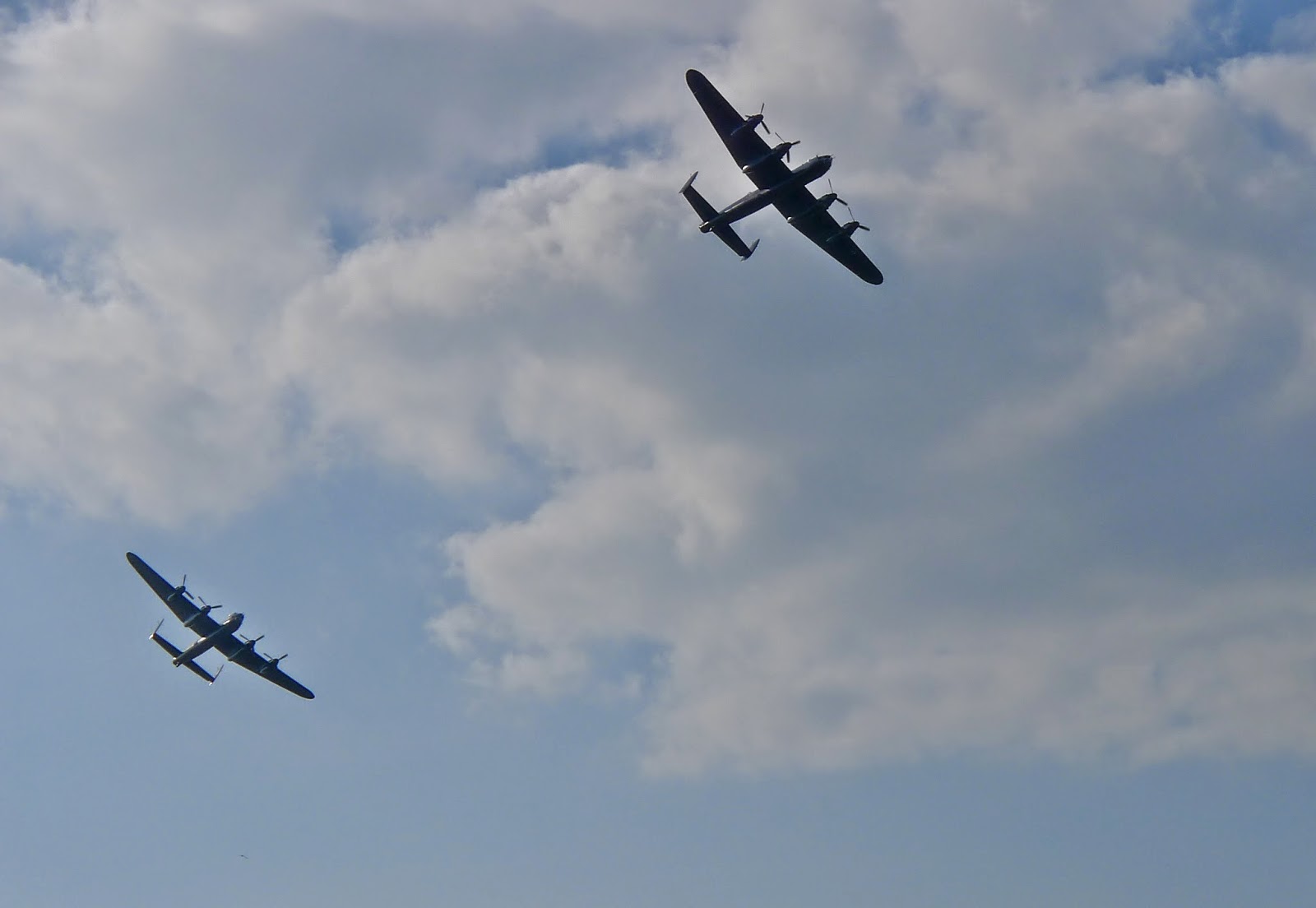 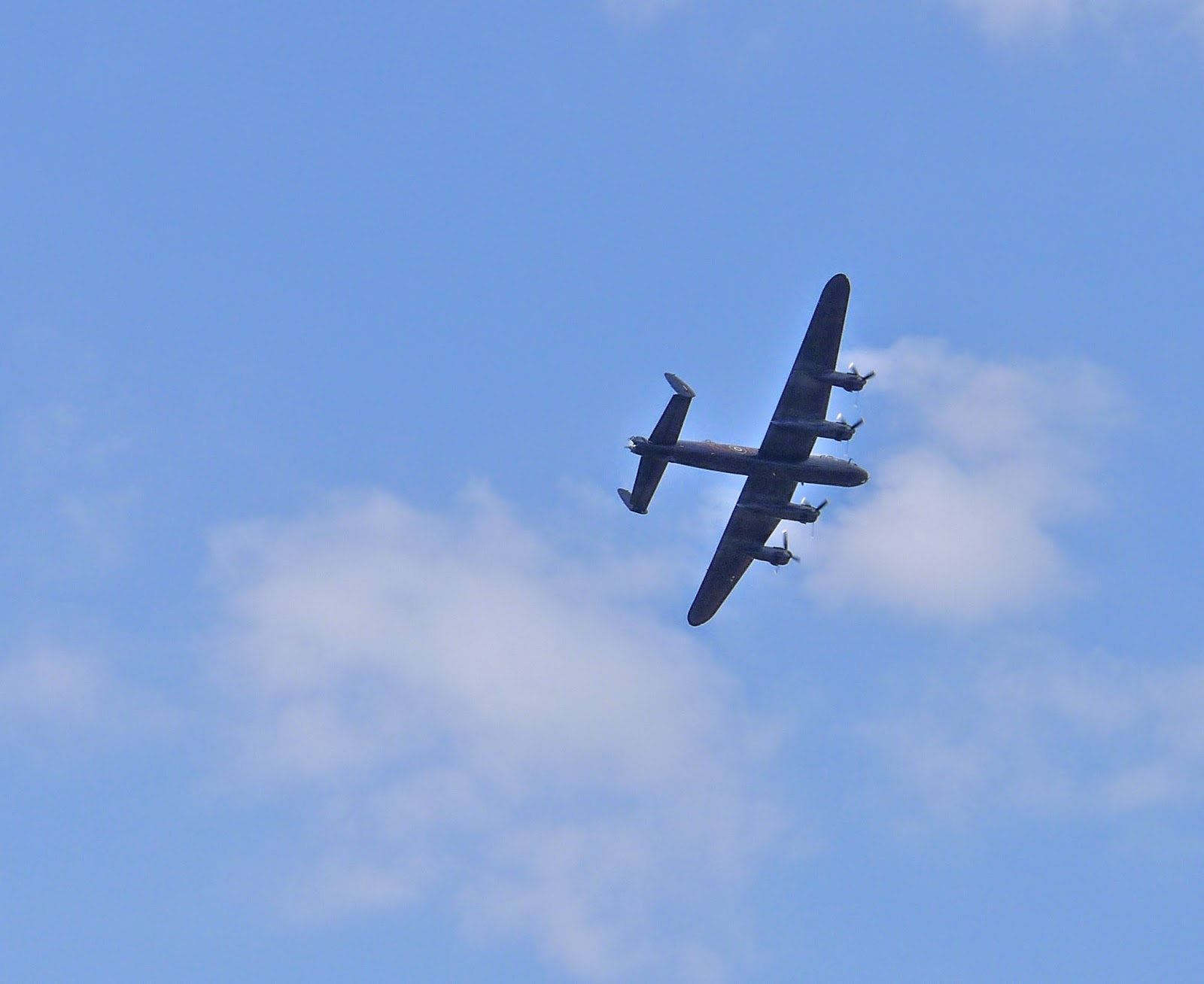 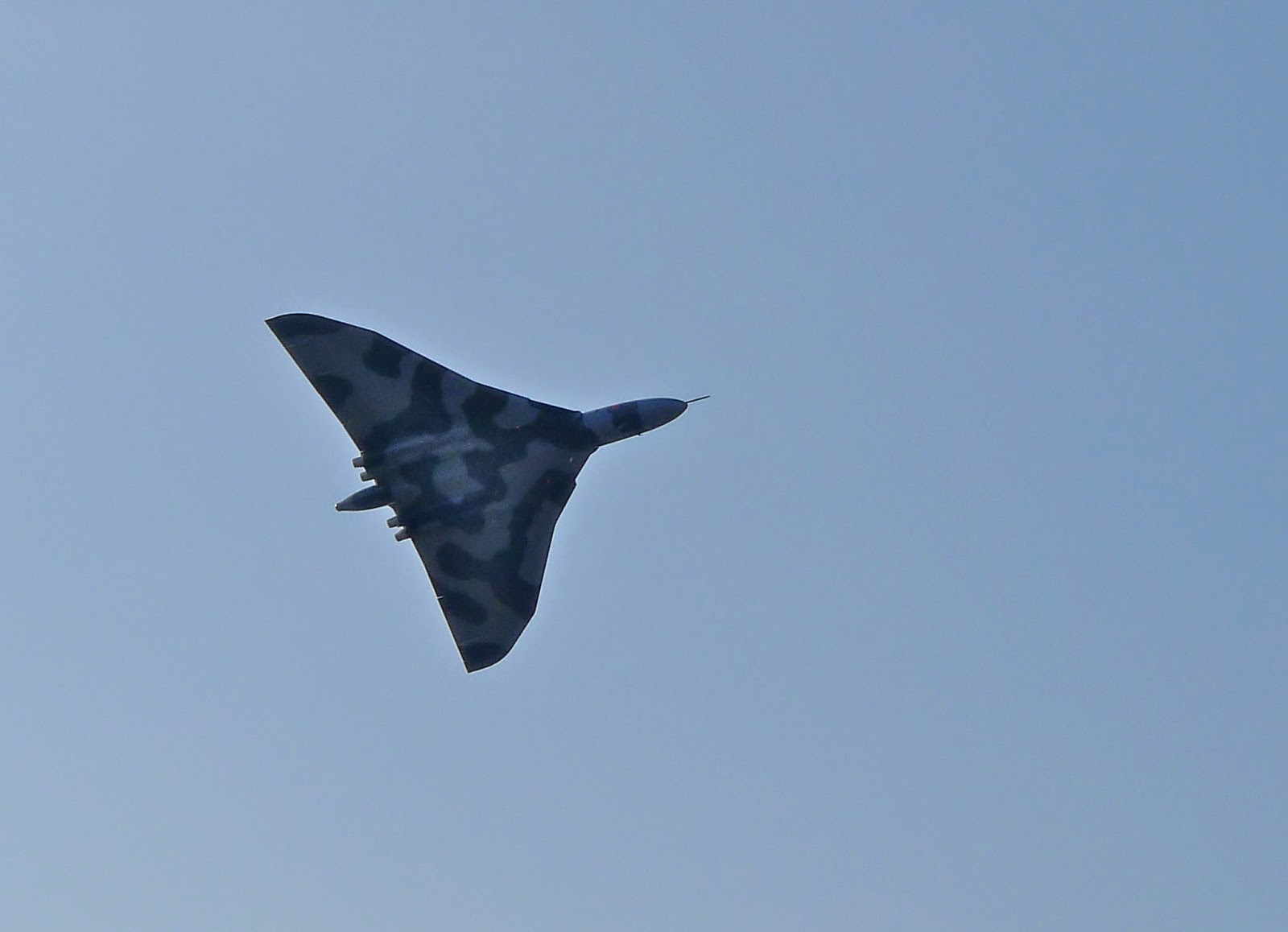 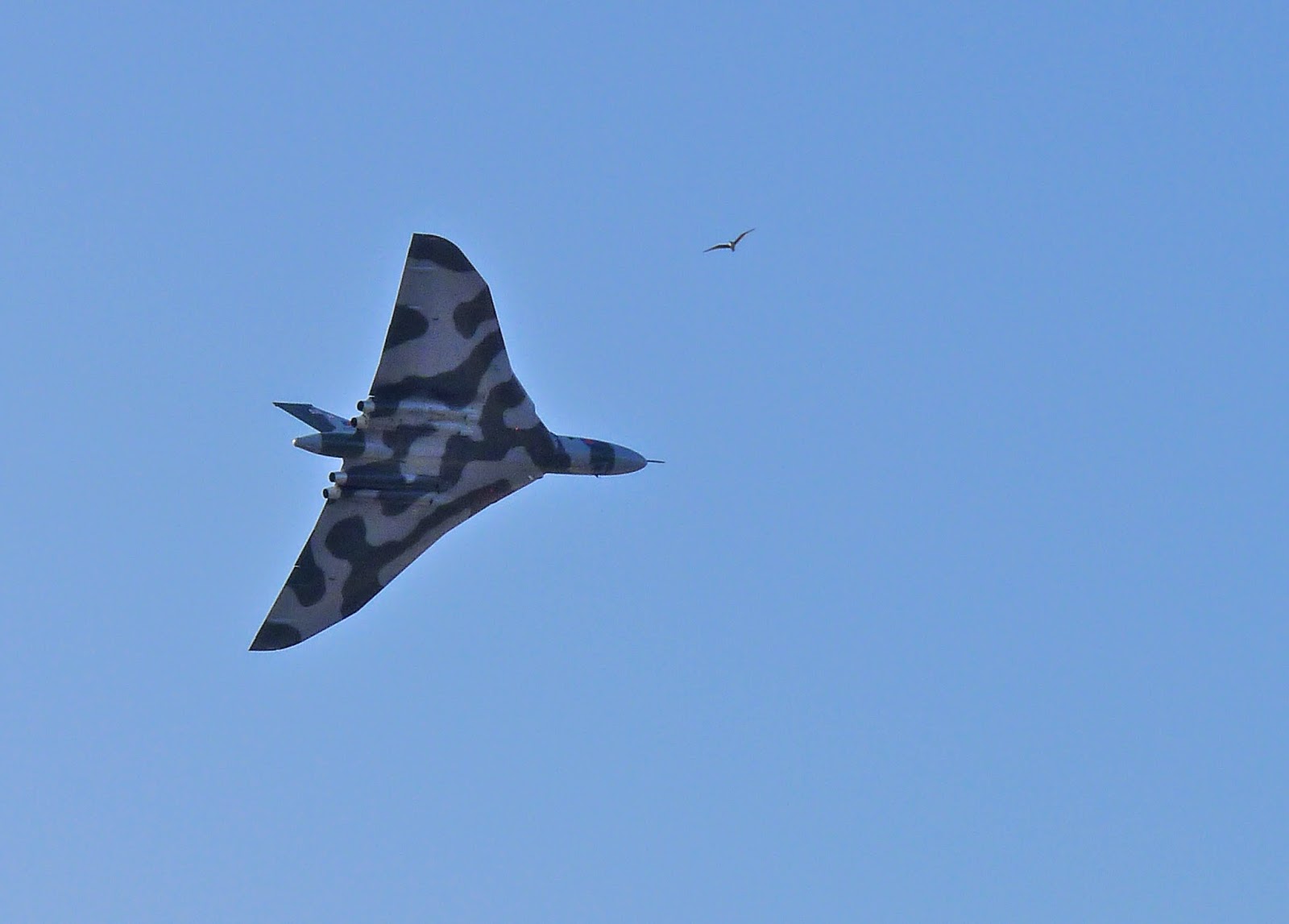 I love the picture above, with the beautiful, awesome Vulcan with the seagull just above it to the right. 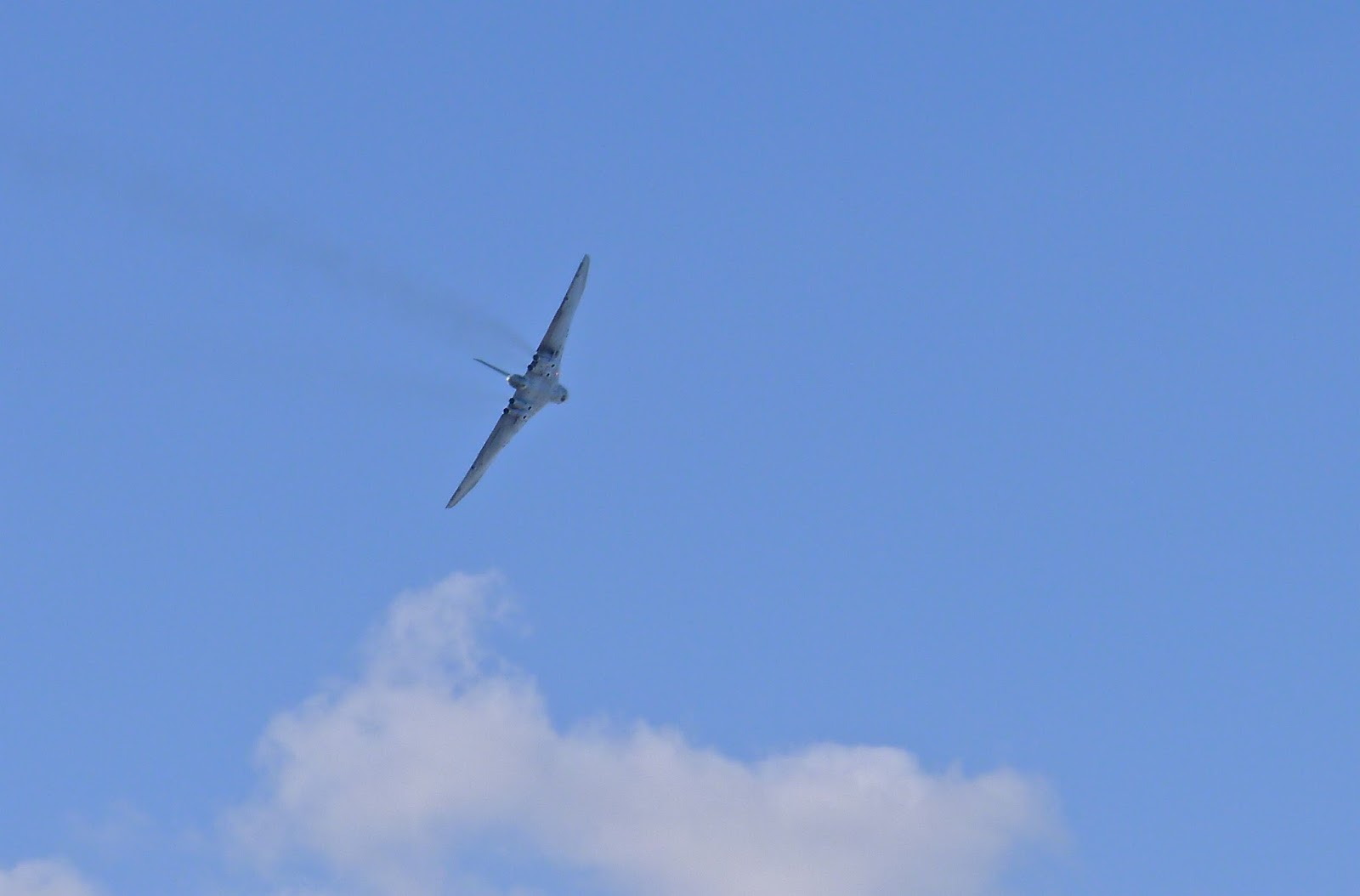 And there she was, off, after an amazing display.

Both the Lancaster and the Vulcans did a flight around all the area, inland over the M6, just imagine driving up there and seeing the Lancs and Vulcan flying over your head. I would have had to pull onto the hard shoulder! Liverpool had the benefit of the display too.

I must say that next time I will not take so many photos so I can just watch the beautiful, graceful movements of the huge plane as it is put through its paces with extraordinary skill but flying within the realms of keeping stress on the fabric of the plane to a minimum.

Anyway, that was my first and last sighting of the lovely plane this year. Next year, I think we will really make an effort and see her fly as much as we can as it is the last flying year, because of the life span of the engines or something. The Vulcan actually is more popular in questionnaires than the Red Arrows, exciting though they are. Probably because they have years of life in them yet.

So that is all for this time, I might find some pictures of the crowd and some helicopters that were fascinating to watch, including the Huey, of Vietnam War fame.