It's ages since I posted but sometimes I don't have much of interest to put on screen, at least what I think anyone would be interested in.

I'm just going to show you the bookmarks I made for Mothers' day. Personally I think the day is a complete manufactured one, where shops make money out of people who can't afford it, by making them feel guilty if they don't spend lots of money in their stores. My Mum has always subscribed to this and I think the same myself. I told my son a few years ago I didn't want him spending money taking me out to a meal just because it is mothers day. So he doesn't ask now and I'm glad. He brings me a card and some flowers, and that is lovely, even though I would be just as happy with a couple of bunches of daffs from the supermarket. I'm easily pleased! I'm not sure about Mother in Law, but in the event she gets treated the same as my Mum.

So I sent off a card to MiL which is what I always do and I put a home made bookmark in. I took a card to my Mum with a similar bookmark. I think both were thrilled with them, and I'd spent a bit of time making them. Mum uses hers, I see it every time I go. I made the pattern up as I went along. 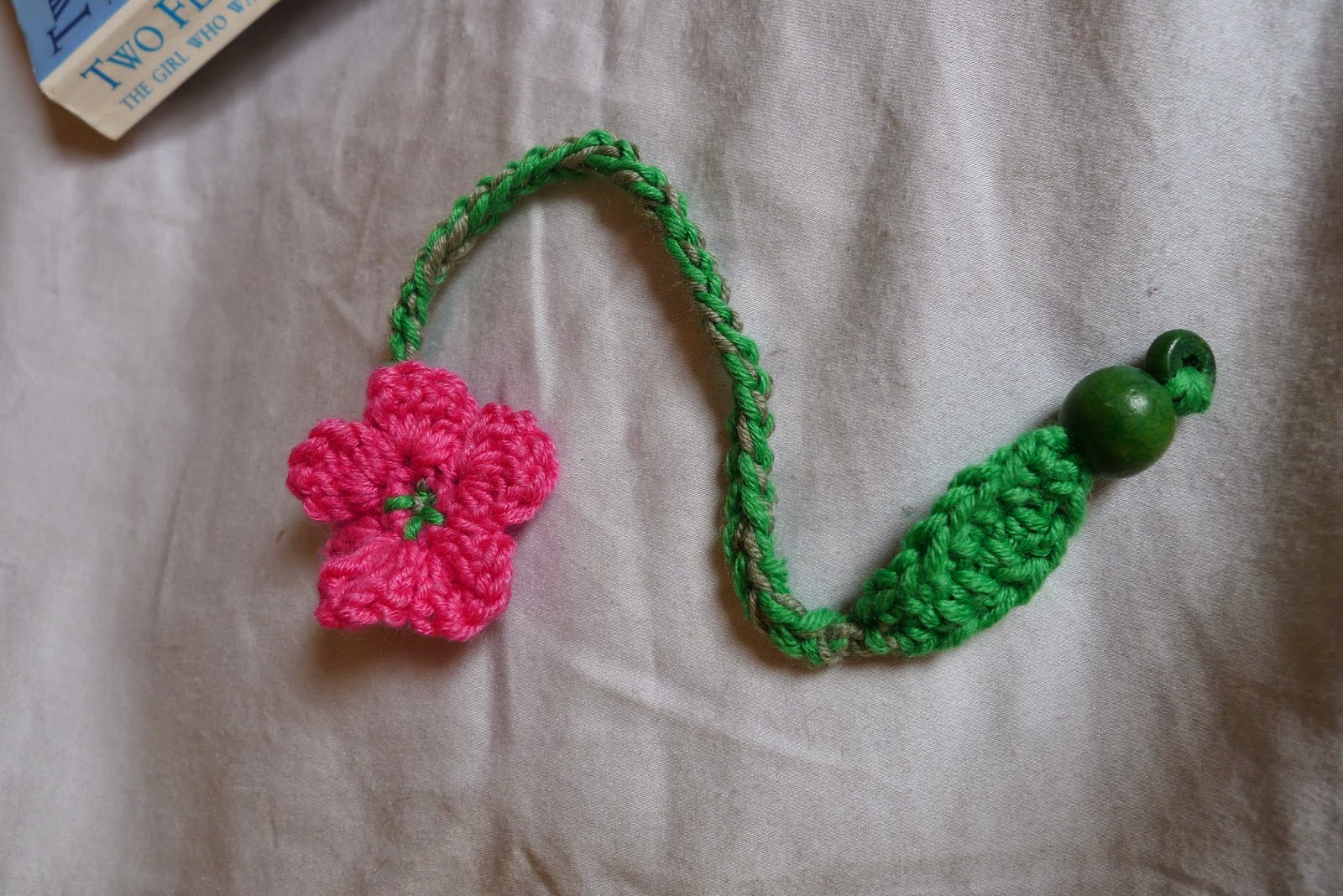 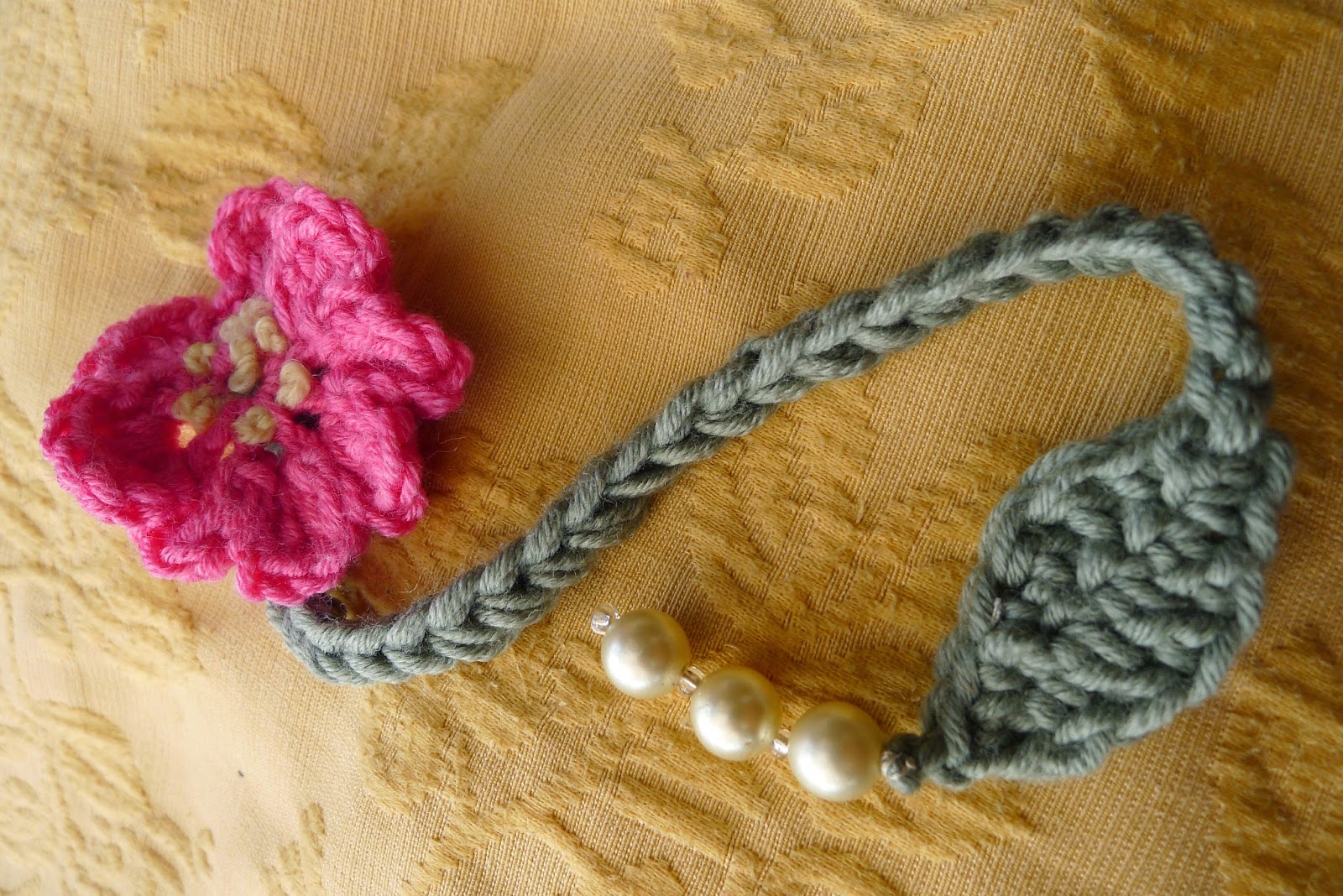 I belong to a Facebook Group, Warrington Memories and it's quite addictive to see the photos going up on the site and although I wasn't born in the town, I lived in the centre from being about 3 to 8 years old and remember some of the older pictures before the town was knocked about in the 70s, and most of the character taken away. It's a difficult town not to modernise though, as the A49 and the A50 run through it, crossing the River Mersey. The A50 runs on the outer edges of the town and the A49 right through the middle, as Warrington had a Roman Ford on the South side of the River, called Wilderspool. The A49 goes straight up North. The place is a bottleneck whenever there is an accident on the M62 or the M6/M56, as traffic has to come through or comes through missing out a section of the motorway.

There was a Ladies Teacher Training College many years ago, and it was burned down in the early 1900s I think. All that is remaining is the old chapel. A charachterless local authority housing estate is built on the site, bearing the only resemblance to the old college as calling one College Place and St Katherine's Way, which was the name of the college (not the way). I'm just going to show you a picture from the air, showing the very old site, with the very Gothic college and the chapel at the front of the college. Then one of it now. Also I'll add a picture of our rather impressive Parish Church. 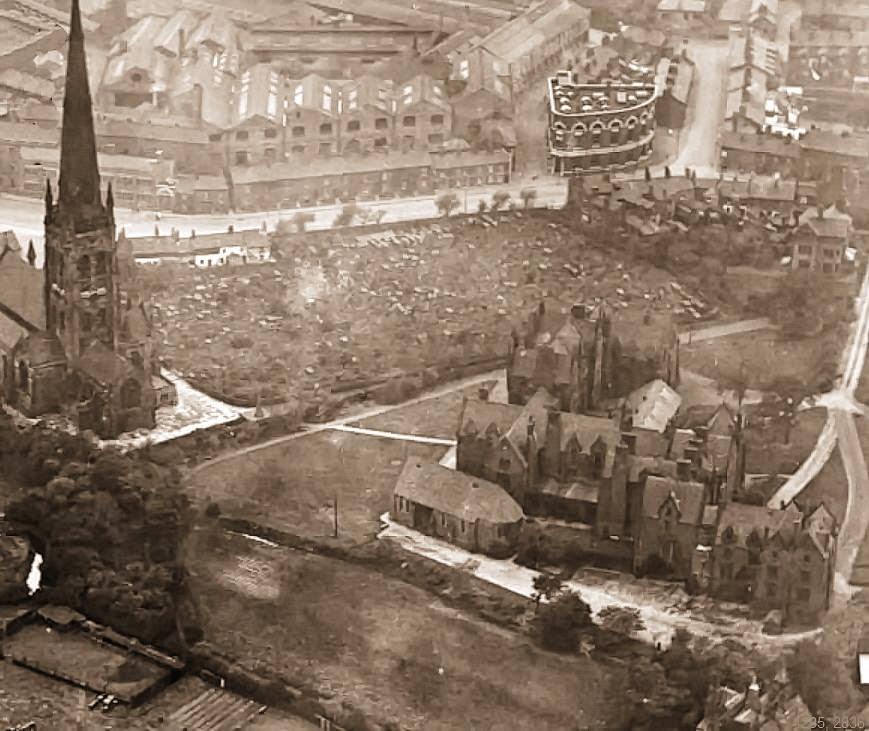 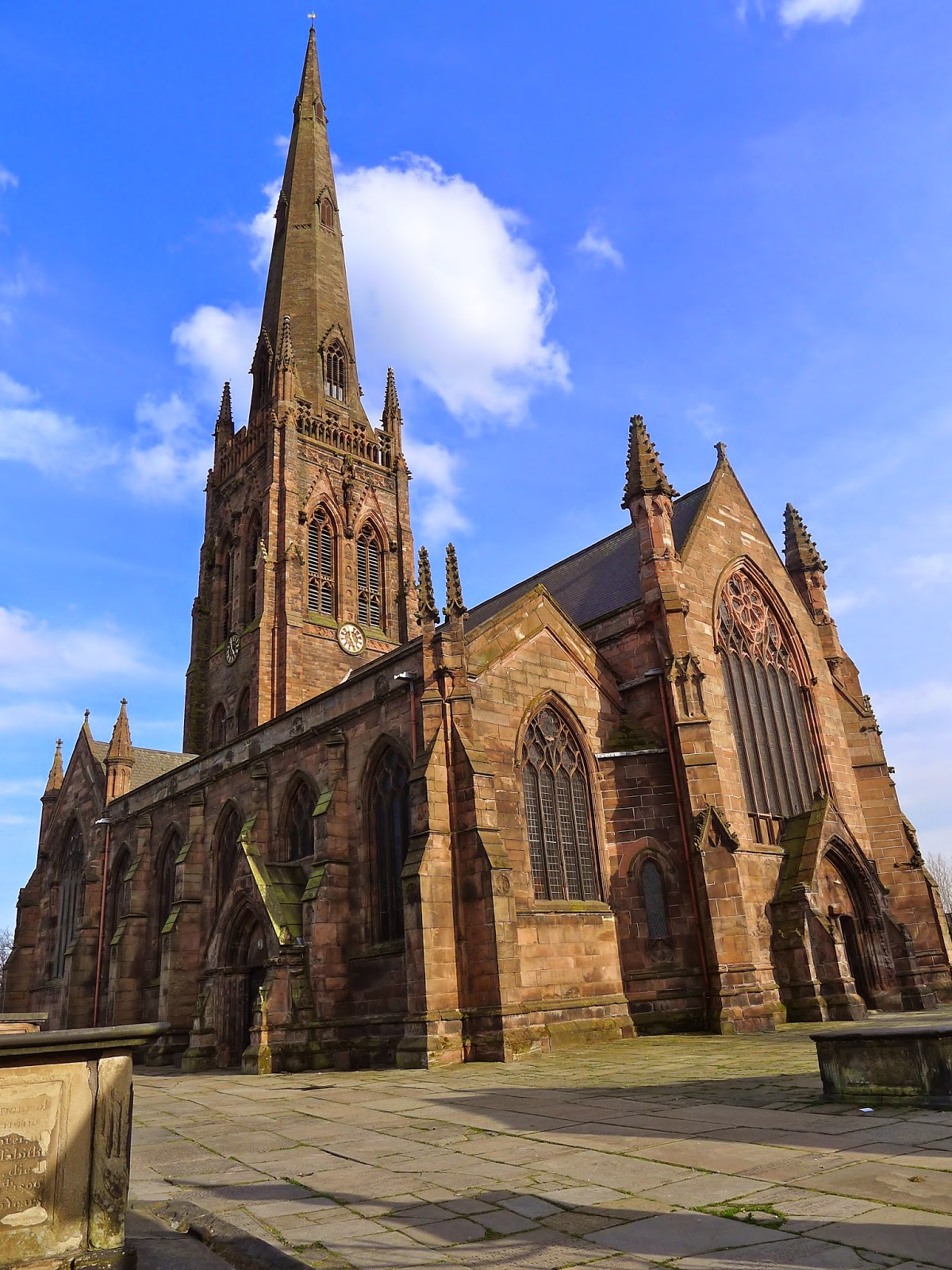 The first photo shows the church, which I have photographed below and the building at the top right on a corner, on the left hand side of the road as you are looking, is still there. There used to be a complete office block built further down, where the cottages are now, by the same Company, Rylands, which was a steel wire company and knocked down now, to make room for a Sainsbury's car park. Rylands was a world famous company and employed hundreds of local people. I wonder if the people living in that estate have any feeling of deja-vu,  living on such a site as this old building?

The top two photos are courtesy of the Warrington Memories Facebook site.

I have more photos of the town which I will post another time. Too many at once, too much.

I nice cycling gear but I don't want to appear like a vintage tour de France groupie and so when Ana Nichoola started designing cycling clothing I loved it but it was soooo expensive. Ana is a enthusiastic mountain biker and road rider in addition to being a brilliant designer. She appeared on The Bike Show a couple of times. Anyway, her last seasons stuff was advertised at very good sale prices. I saw this fabulous star jersey and then when it went down again, I had to have it. I have recently tried to get the tights to go with it, which had some stars on, but she has given up chairmanship of the company for a while in order to do more challenging things. Such a shame as I would have like them.

What do you think if this gorgeous jumper (well I bought it to wear as a jacket and maybe two lots of stars would have been too much). 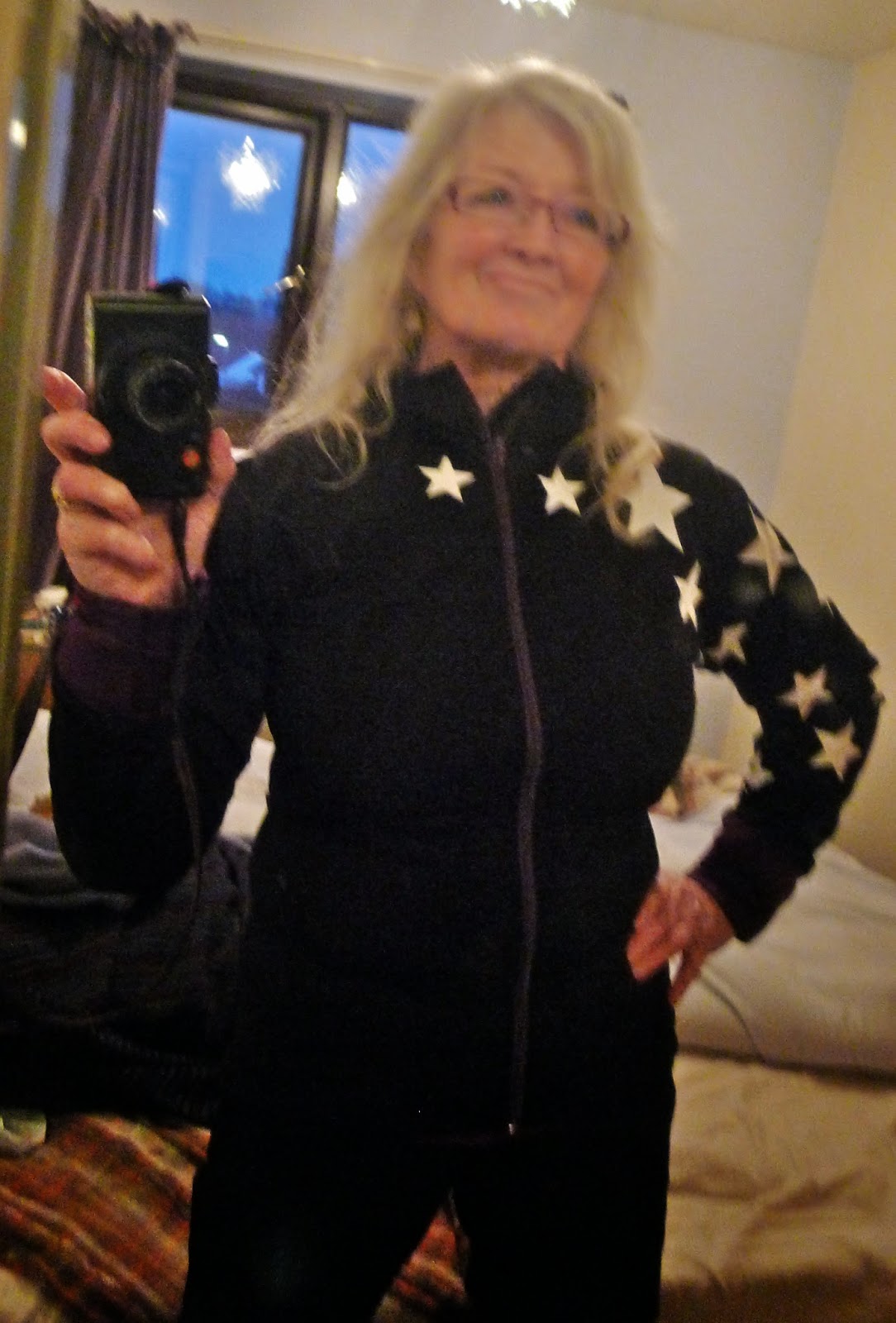 Well, that's it for now, I hope you like my pictures of one part of Warrington. Until next time.