A WALK OVER LYME PARK

Last Sunday I went over to Poynton on the train to meet with my friend who lives in Newcastle and her sister who now lives in their Father's house after he died a couple of years ago. It was decided we would go for a walk and take a picnic.

Getting on the train, I realised why I couldn't park at the station, and that was because of the Manchester BUPA run. The train was packed with runners all dressed in their running gear with numbers and it was wonderful to see them all congregating at Manchester Oxford Road and later at Piccadilly Station. I was seriously wishing I had been able to run with them, as I used to do quite a lot of running before my knees gave me trouble. However, I was full of admiration for their enthusiasm and excitement.

My friend has recently had heart procedure because one whole side of the arteries was blocked and it was thought she might have to have a heart bypass, a great worry to her, as she is very fit and active and rather like a bouncing girl guide. However, where she lives luckily there is a famous heart unit and the second surgeon thought he could do something, which he did, so she had two stents and was bouncing up the walk, as if nothing had happened. What a miracle. I was so pleased for her as it would have hit her very hard to have been out of action for months as a result of real surgery.


We took the car to get a bit closer to Lyme Park, as it was nicer to walk in the countryside, rather than through the streets of Poynton. We picnicked at a lovely spot overlooking a little stream and watched a heron take off and fly, then countless butterflies, before setting off ascending about three of the steepest stiles I have ever encountered in my walking days, almost like a very high step ladder.

We passed a beautiful farmhouse, set in the middle of nowhere, before crossing the main Manchester to Buxton railway line, me saying to myself 'see tracks, think train' but fortunately a train had just passed so it was OK.

I'm sorry this butterfly kept closing its wings and the only one I have of them open is out of focus. I have no idea what sort this was. 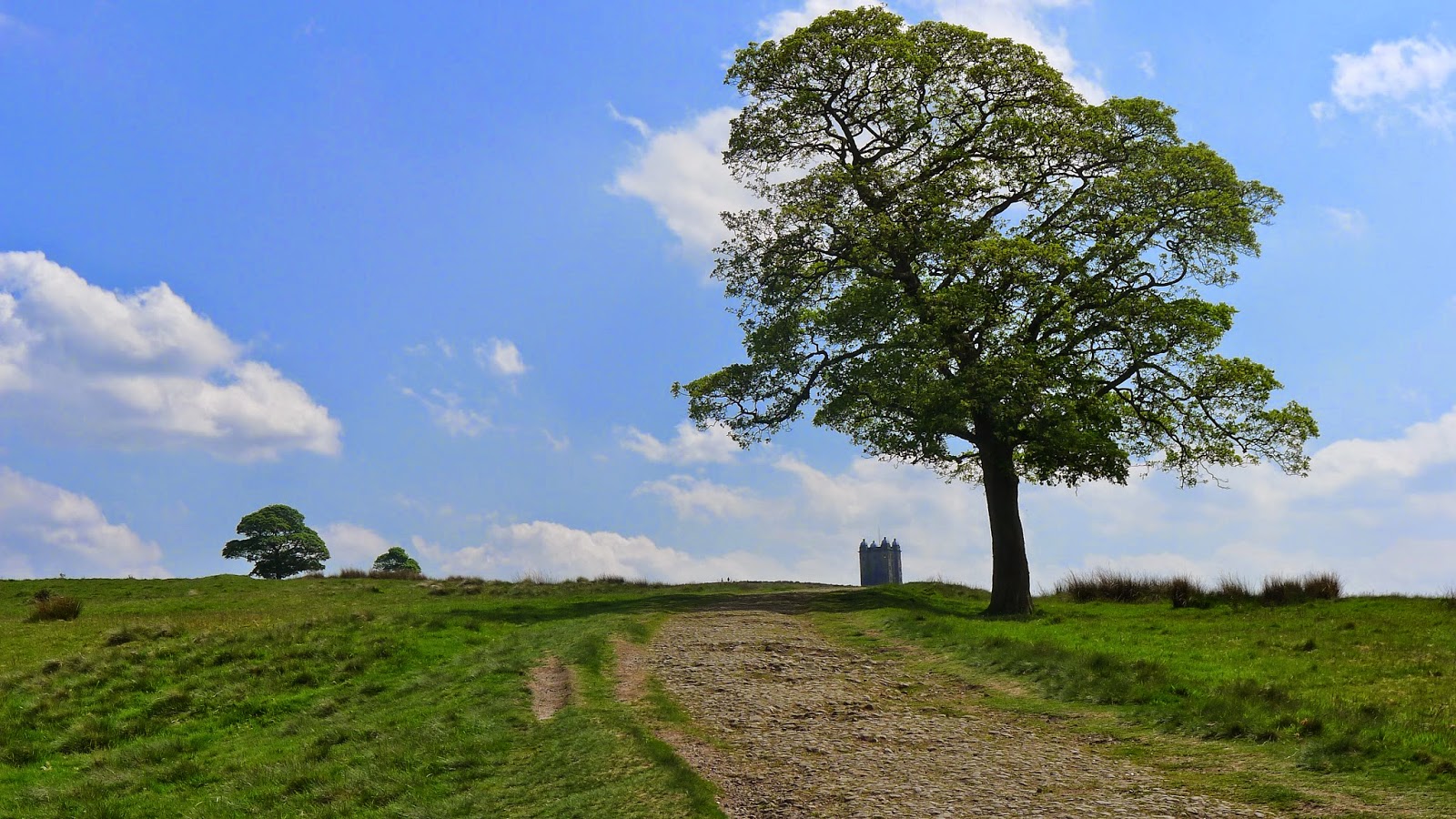 Then we climbed a bit of a hill, and eventually arrived at the actual park area of Lyme Park, and walked up to The Cage, apparently a shooting lodge for the grand visitors in its day. The ladies would sit there taking tea whilst their menfolk shot animals/birds, or whatever they shot. From the distance it looks a little building but it is surprisingly large. The view would have been amazing but for the heat haze but we could see over to Kinder Downfall, and even the rocks there, with the aid of binoculars. I knew the geography of the area better than the others so was able to point out the rest of the landmarks.

Down the hill, and we came to Lyme Hall, and the endless queue of cars going into the place. Having said that, without those cars the hall wouldn't be able to function. Still it was nice to use the facilities there and then walk off leaving the crowds.

We walked downhill and ended up walking down a farmer's track, with the notice on the end of the road, in the photo! Quite comical. I don't have a Sat Nav so I have not experienced this sort of thing. 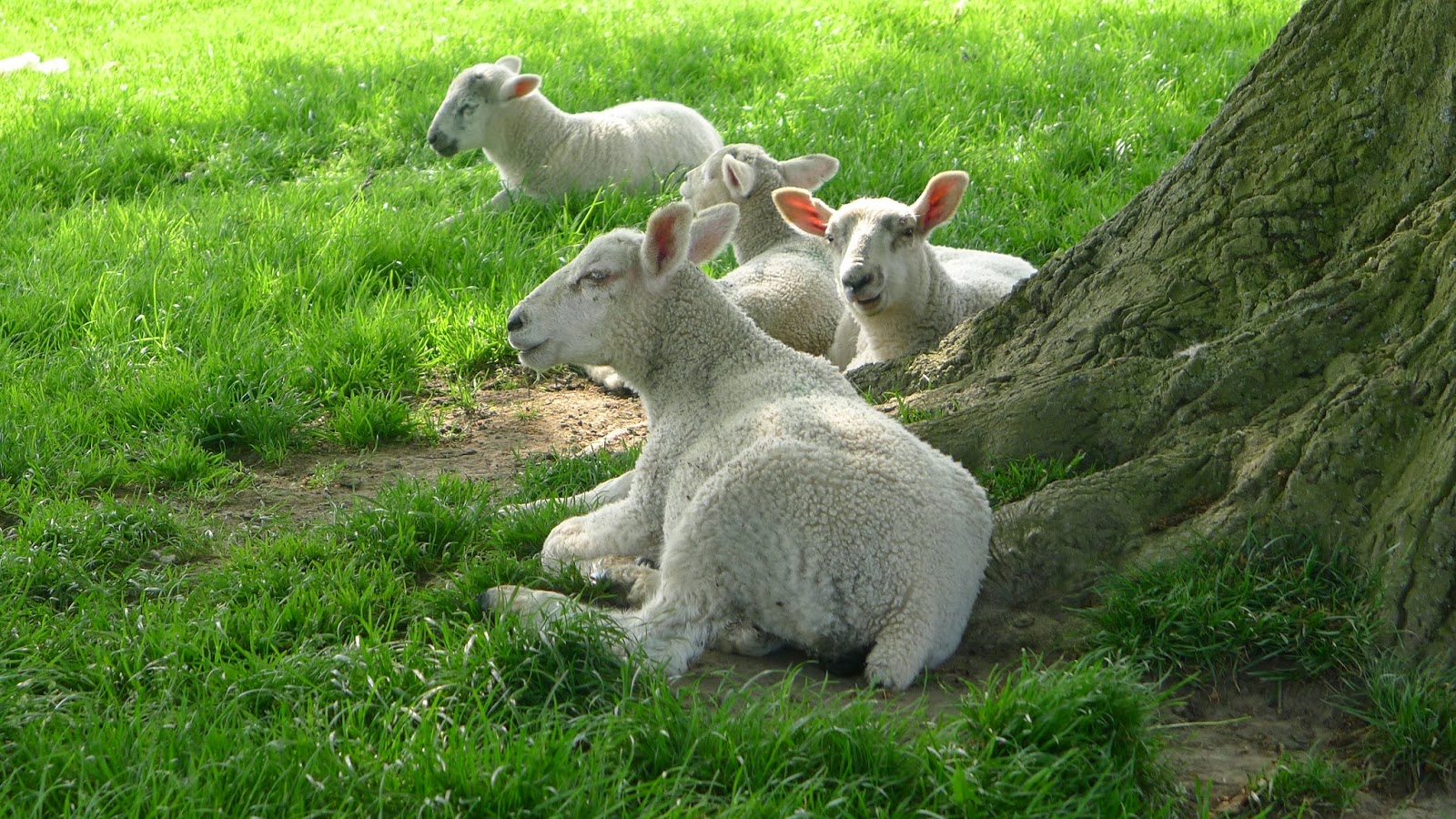 I was right up to these sheep, no zoom lens here, they were totally unafraid.

Then we came to the canal and saw these lovely geese with their babies but they wouldn't come any closer because......... 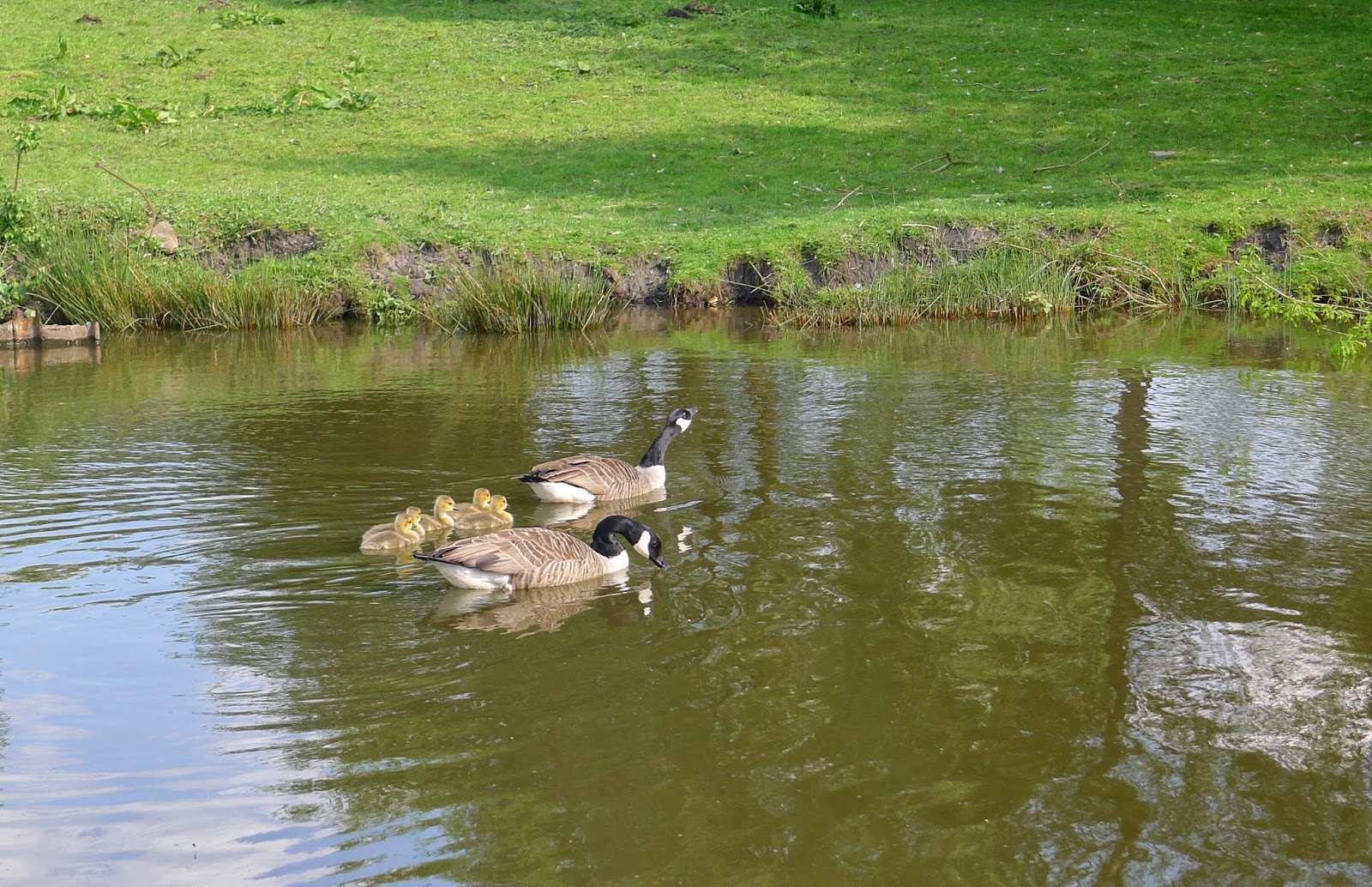 This nice little narrow boat was coming along.

I would love a very small one, just long enough to have a 'sleepover' in and have space to make a snack meal on it - as a means of escape from normal houses and civilisation. I don't think I would like the commitment of a 70' one, rather a luxury unless you are living on it or going on holiday.

The Horse in the picture allowed me to go right up to it, in fact it came up to me to be petted. I used to be accustomed to handling horses in another life, so was pleased it would do so, no nerves there. 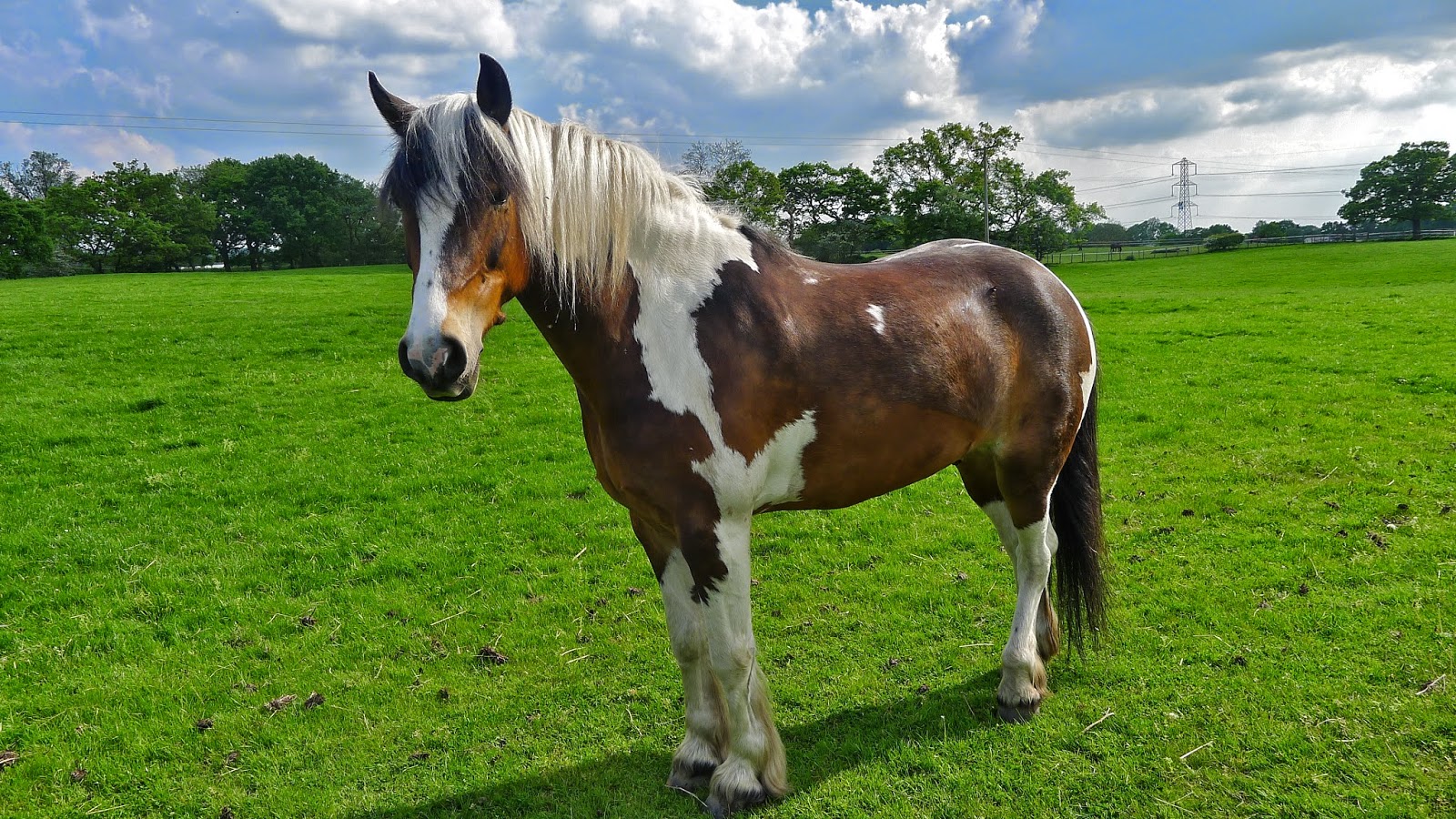 So, back to Poynton, a pizza and salad, with home grown redcurrants and berries, my mouth is watering at the memory of them. A lot of chat and discussions and they then took me to the station by car, as since my sciatica problems, I've not been able to walk much distance and certainly nothing like the distance we walked that day, particularly the hills. I was back home, having changed trains and collected my Landy from the station in just over an hour. It is just not worth driving over there, notwithstanding I don't know the roads around Manchester Airport very well, there are so many turns that I forget.

Just before I finish, I'll leave you with this lovely picture, taken through my window, because to have opened the door would have disturbed these birds. 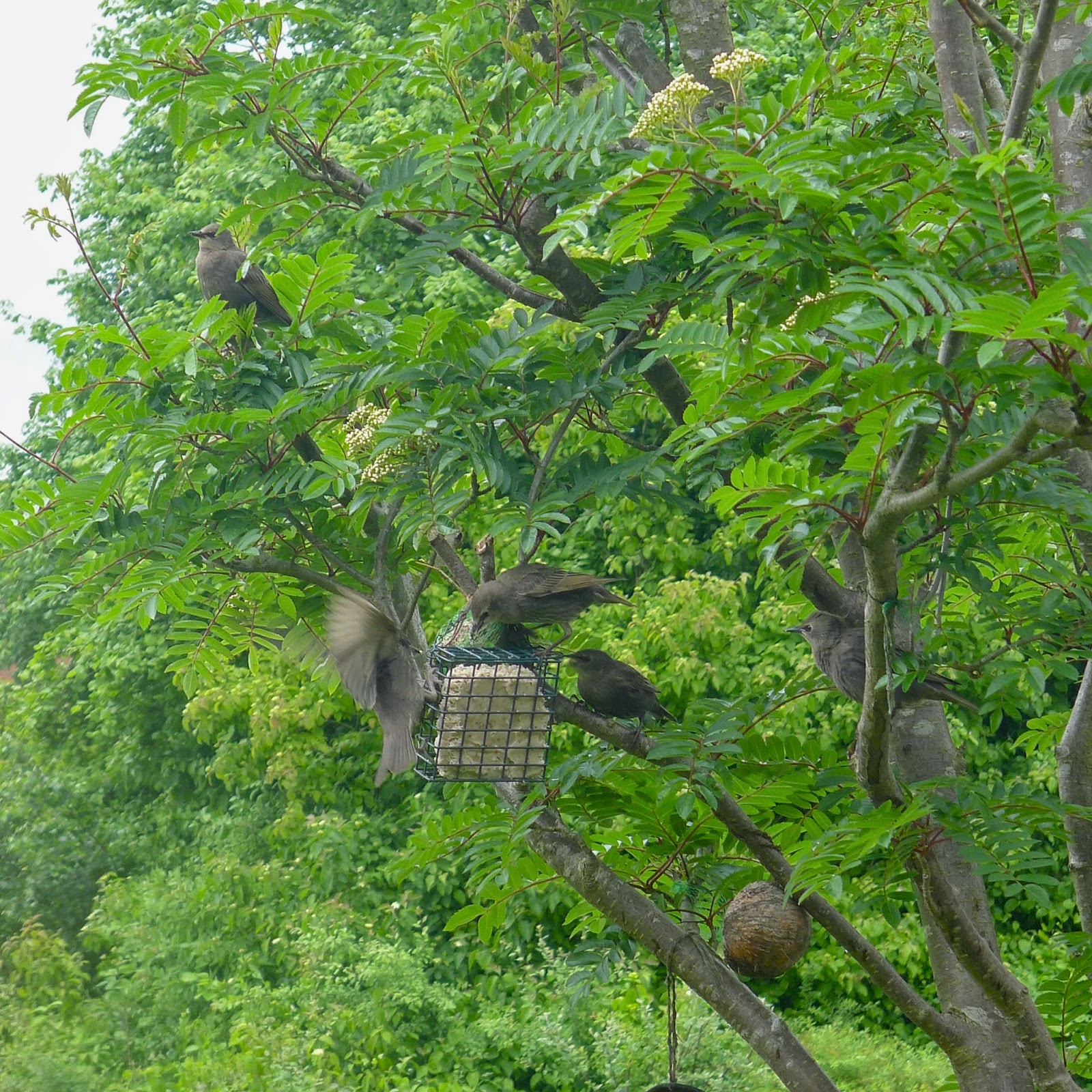 I hope I've not bored you with what seems to be a lot of photos but I chose what I thought were the most interesting ones.

Until next time.
Posted by Campfire at 14:30