It's a few weeks since I blogged and I have to look at my iPhoto page to see what has gone on since, unless I go back and talk about something else.

The tunic top I was knitting in Noro Silk Garden Chunky is now finished, after being a WIP for over 18 months. It was intended to be knitted in DK wool but I didn't realise and so had to do a small size, but with the chunky wool. It worked. The only thing is, the pattern is shaped such that it is almost like a halter neck as the armholes go right up towards the neck. When I had finished it, it made my, well chest, look rather large. So it was undone and then I knitted the border around. Result, success. It was surprisingly difficult for me to remember which row I was at unless I ticked each row. I am not an expert knitter.

Anyway here is the photo and the colours are fabulous. 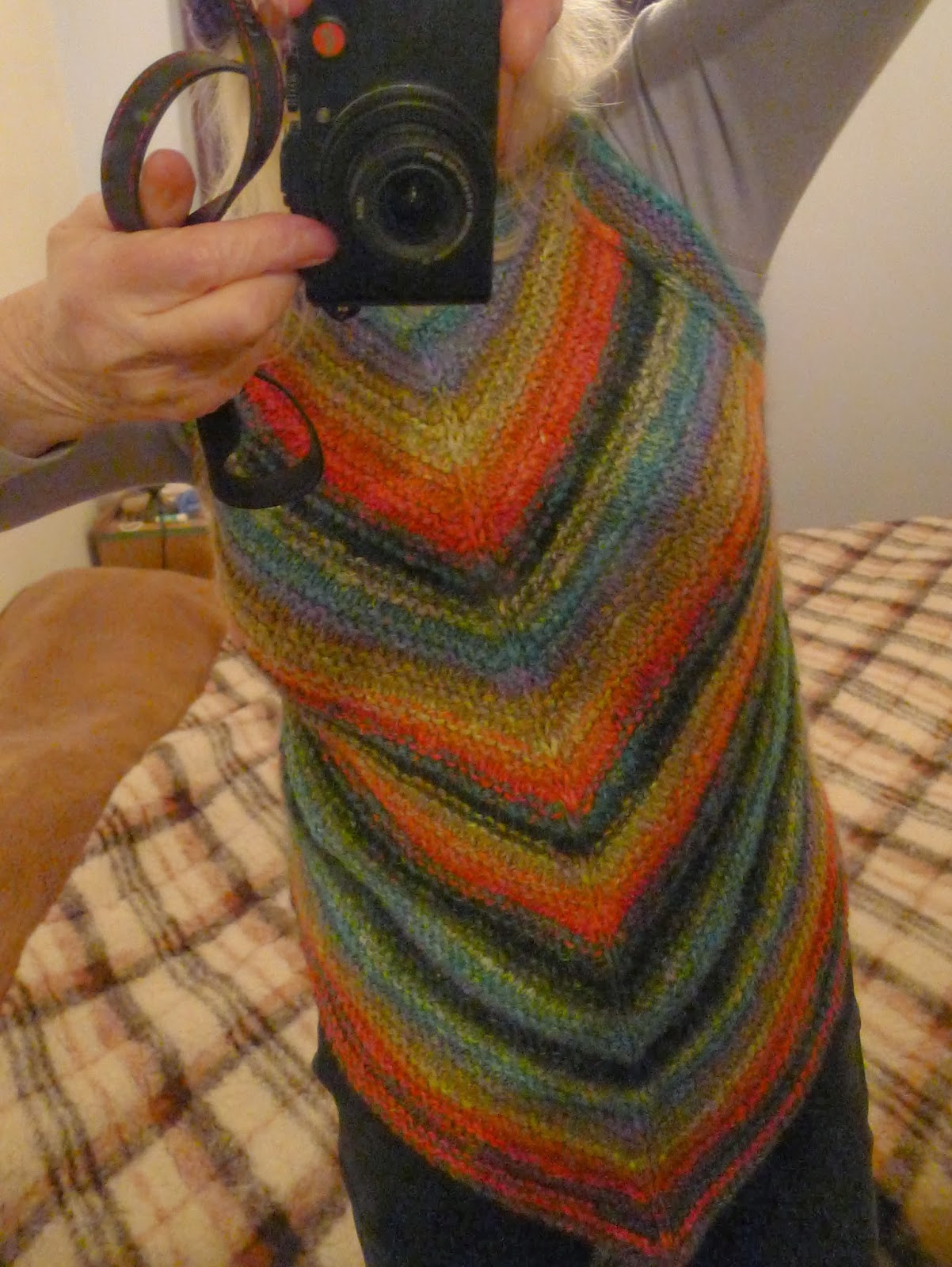 I finally finished crocheting my ripple blanket which is for ME! It's a bit of a cheat really as I've not sewed in the loose ends nor put a border on the side but I couldn't wait to post the photo as it is. I'll do another one when I've finished it properly. 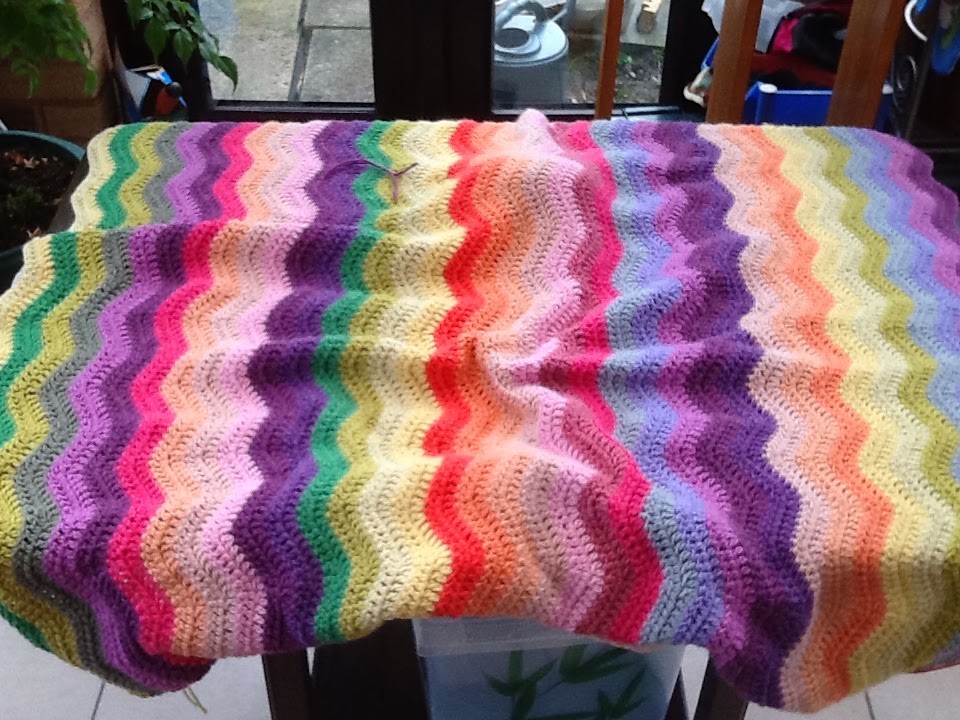 I went to a Sustrans conference at the National Cycling Centre, AKA
the Velodrome in Manchester. It was the usual type of conference but we had lunch overlooking the track and there was training going on. I have never been there before and was very excited. We had the conference in the Reg Harris Room and there were various items of memorabilia behind glass. Strange, because when I was younger, I used to see Reg quite often, as he used to come into a cafe we cyclists used to visit. He just used to sit with us and chat.

This might sound rather silly but sometimes when I visit my Mum and we decide to have a bite of lunch we will have spaghetti hoops, this is my suggestion as it means there is not a lot of fiddling about and it is just simple. I have noticed when I shake the hoops out into the pan that all the hoops seem to stick around the tin, and I have never had my camera with me to take a photo. Well, I did some pasta the other day and when I had drained the pan, this is what was left around the side before I scraped it off! Strange. I do have some silly ideas what is photo worthy! I took a photo of my veggie sauce too. I'd taken half out to add something meaty for husband, that's why it doesn't look much and it is also a large pan. 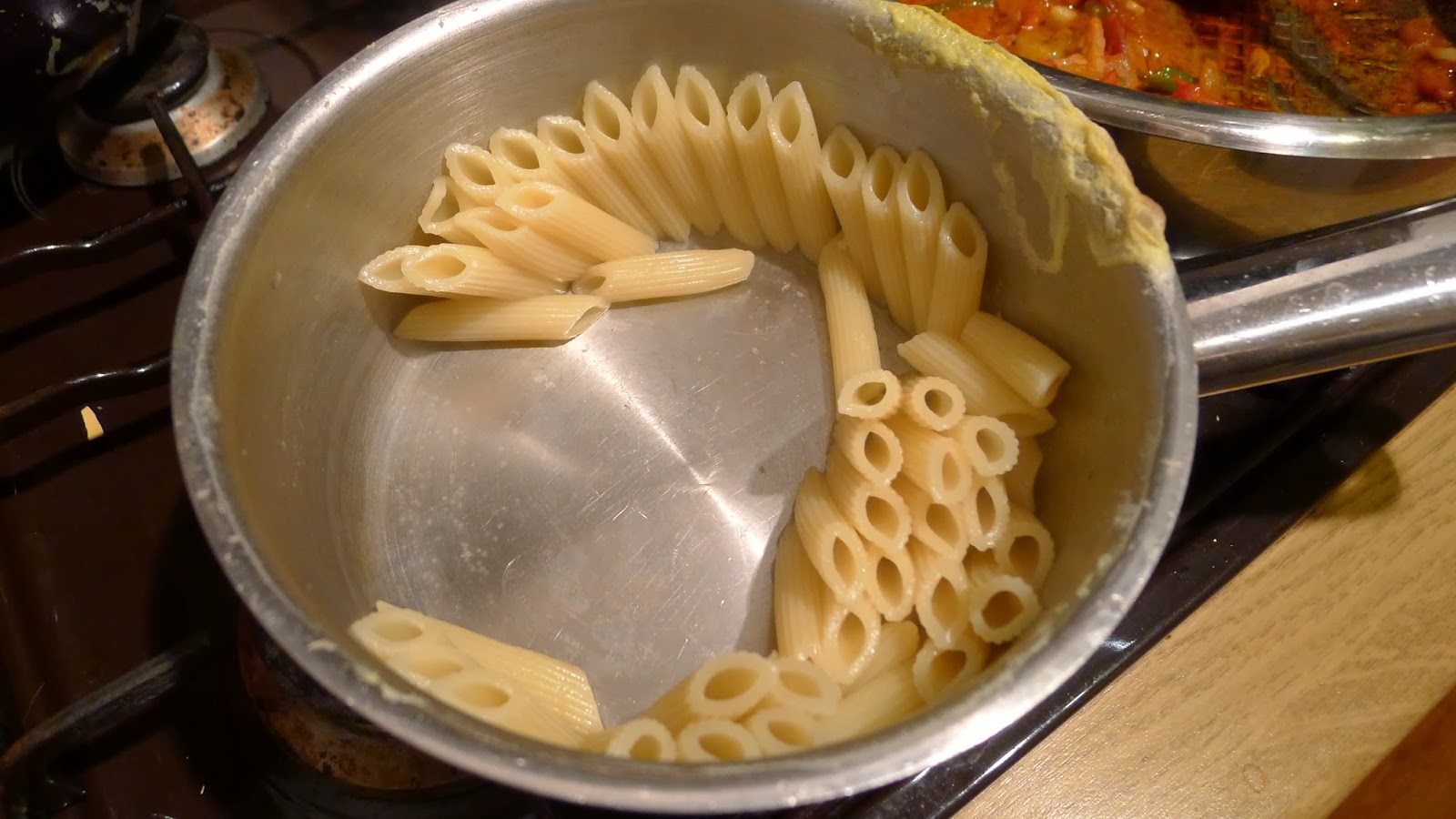 And lastly, does anyone remember I completed the Cycletta event from Tatton Park in May? Well my patience was rewarded as the photos were offered half price, so I bought them and received a download the other day! Here are a couple of the official photos. I look as if I were on a 'ride in the park'. I wasn't and worked very hard that day. 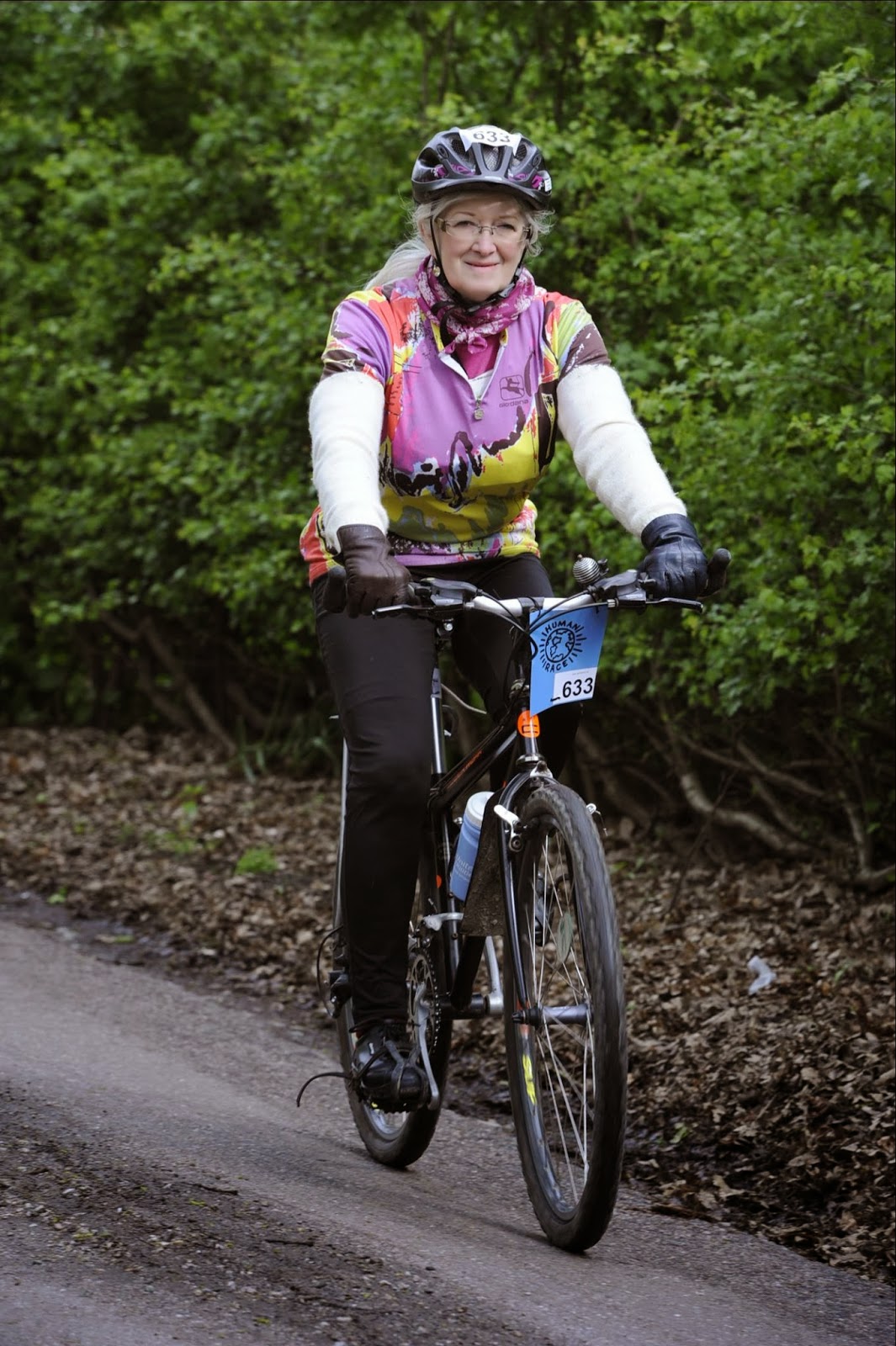 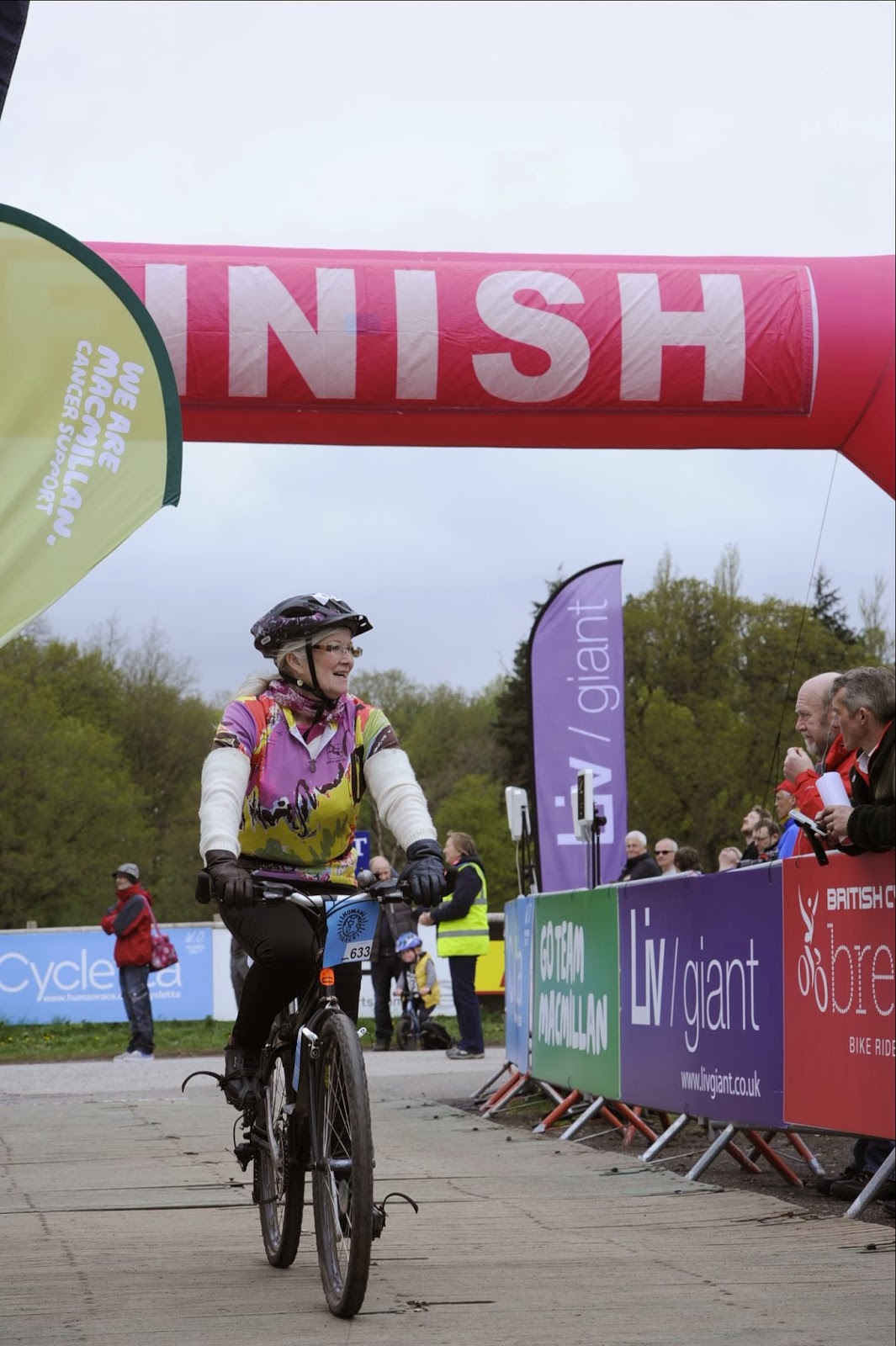 Ah, before I leave I must mention that Barbara, of March House Books has awarded me a Liebster ward! I've just had a quick look at her blog and, oh, dear, I hope I can do it. I've never done anything like this before. I'm not sure that I know enough bloggers to award them. Do I have to know them reasonably well, ie do they have to comment on my blog, I'm not sure. I'll look at it at some time in the future, unless it has to be done very quickly.