Hurray, it's at last finished, bar sewing in ends etc. Here's a picture of it before I give it to its new owner. 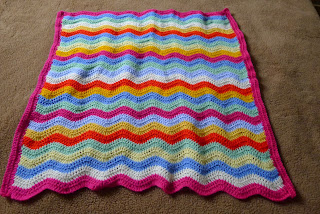 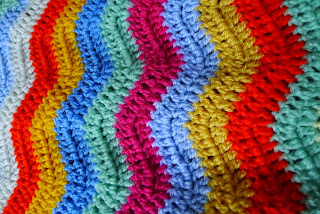 Today I went around the corner to see the three Bengal kittens that my friend has. Two of them are going in about two weeks, so I'm pleased to have seen them before they go, the last time I saw them they were blind mice! Now they're running around the house like wild things. Gorgeous!

I am sorry about the quality of the pictures but those kittens just wouldn't stay still and the room was a bit dark.

Like most people in the UK, we have had a lot of rain in the last couple of days but it's still warm. Apparently coming warmer over the weekend too. I'm hoping to get out on Sunday to go to finish of a bike race, where older great named bike racers race with a younger one, and it is by invitation only. It's always a chance to see people I've not seen for years, some I saw the last time, and we are all getting older.

I sold a bike on Ebay last week. It was my lovely vintage French bike, by Cycles Gitane, a very lightweight one that I bought when I was thinking I would ride about the parks, in a very girly manner - but - I didn't!  I have used it quite a few times but so little that the new tyres I bought still had the rubber strip along the centre, which wears off after a few hundred miles. It was quite fast for short distances, but with it being a lady's bike, rather than a road bike, it wouldn't have been a bike for distances. Anyway, it's always difficult to get little jobs done on older bikes and the brakes could have been better, so even though I didn't get what I really wanted, it's gone. And to a good home too! A lady bought it for her daughter for Uni, which is where I hoped it would go. The family were also bike mad, and said the bike was far better than they had thought and couldn't believe how light it was.

Bye, Bye, Gitane! I know you will be loved and used.

Well, nothing really has happened since Yarndale. Mother in law is coming to see us, not staying but I am having to think of places we can go to, difficult because they are from a very scenic place and so what can I show them over here. I suppose there is the Trafford centre! And what can I feed them on too?

Well, that's all folks. Till the next time.