ON THE VULCAN TRAIL

On 5th August TH wasn't well enough to go to the Classic Show at Hebden Bridge, he was still mainly in bed and still wobbly. I had really been looking forward to going, mainly, I admit to all and sundry but not TH, to have a look around the town, walk down the canal and walk around the very pretty shops and cafes, plus a few charity shops. Last time we went they were just recovering from the really bad floods a couple of weeks previously and a lot of the shops were empty, because of the flood damage.

I happened to go on the internet and realised that the show that Chris Evans was sponsoring at Oulton Park was also hosting the Vulcan bomber or XH558. Now that plane does something to me, I have seen it once, many years ago and as it only has another year left before it MIGHT be taken off the air, I would love to see it as many times as I can. Except that I can't because it is flying where I am not. Apart from that day. I made a spur of the moment decision to drive over to Oulton Park, not to pay to go in, as it would be too expensive, but it was also a sell out. Chris does this show for Children in Need and it is always fully booked.

I would drive over to the road before the Oulton Park turnoff. I was sick with excitement on the drive up. I had underestimated its arrival time from Doncaster and as I was looking for somewhere to pull up, I heard a tremendous noise above my head - hey I'm being bombed!!! Then thought I'd missed it. It only took about 23 minutes from Doncaster, I'd checked take off on Twitter. Too bad, I was so disappointed. Then I heard the roar again, it must be coming back around. I shot out and tried to get a photo. Sadly I forgot to put out the zoom, I was so excited and although my camera is a good one, it is a compact without a long zoom. I wished I'd concentrated on watching Vulcan rather than photographing her.

Whay hey man, (is that how you write it Brenda?) I managed a couple of photos, but they cannot possibly convey my excitement, and the magnificence of seeing that huge plane swooping, turning, showing its impressive shape. She came around once more, then went up into the air, and I heard the famous Vulcan Howl, that she makes. What an experience. I wish I'd picked a spot with lower hedges, as I'd have seen a bit more. Also the road was the main road to Winsford, which was extremely busy and noisy for such a narrow A road. Full of excitement I drove home, with a big grin on my face.

Here are three photos only. 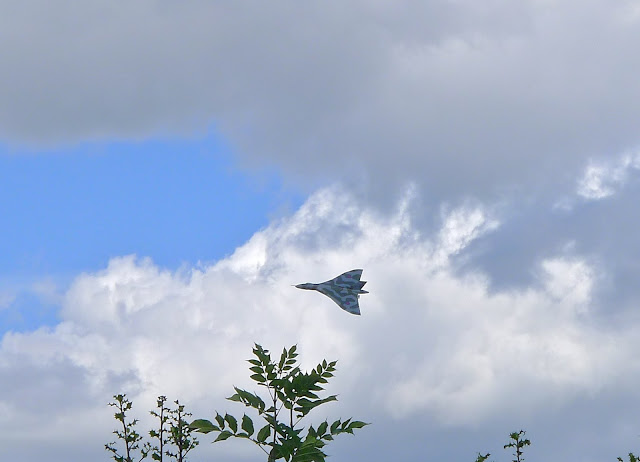 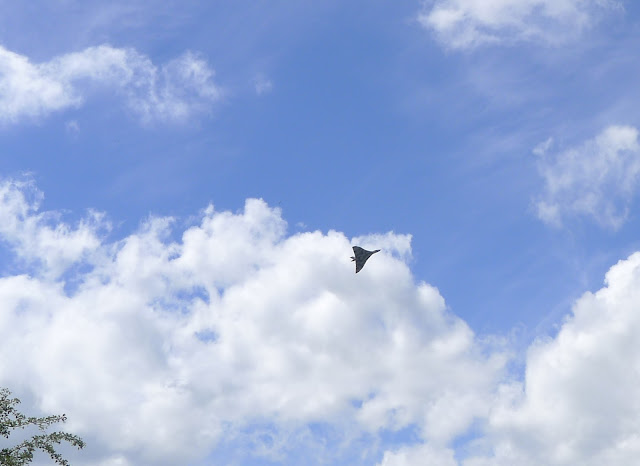 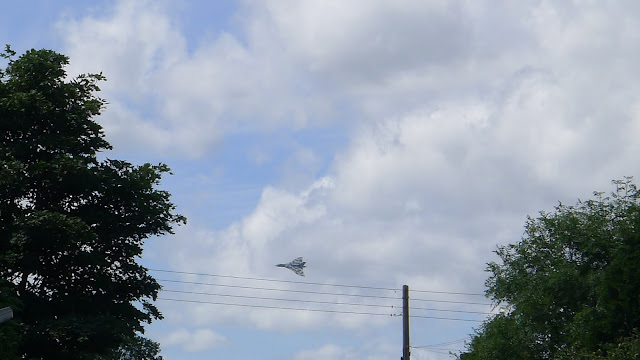 I'm not going to write about anything else, as it would be a complete anti-climax for me, even though it was a couple of weeks ago. Until next time.