MEETING AND A TRAIL RIDE

I have not been so active on the Sustrans front recently for personal reasons. However, I thought I must get my act together and get out a bit. I had an email from one of the other Rangers asking if I would meet up with him for a discussion.

The Catalyst Museum at Widnes is a hands on Science centre which is great for children as an introduction to science. They have a cafe there and I thought it would be a good idea to meet up there for a cuppa and chat, then maybe a ride along the trail.

What a chapter of events, I can be such an idiot sometimes! Anyway, I was to be at the Museum at around 12 noon. Caught the train to allow me to cycle down from the station at Widnes and have plenty of time. Stood up to get out of the train and couldn't find the 'open door' button. Eventually I found it, on the other side, it was where I had been sitting but above my head! Unfortunately all the doors closed again and I had to get off at the next stop! One would think that the buttons should be where the people standing up to get OFF the train can see them. Anyway, had no idea of how to get to Widnes from Hough Green. No map, as I wouldn't have needed one to where I was going so I asked! Five miles later, I realised I had been sent on a wild goose chase, as instead of going into the town, I was going into the countryside. Seeing Alpaca in a field definitely does NOT mean going into Widnes. I asked some workmen on a garage roof and they said I was miles away so I retraced my pedals and tried again. Fortunately the person who told me didn't feel the need to send me the wrong way, as I gradually saw in the distance signs of the town and I was OK there.

I met the guy I was supposed to meet, only about 10 minutes late. I was rather out of breath and told him the tale, feeling quite a fool. We had a good chat and a laugh, and then went to cycle back along the trail towards Warrington. Here are a few photos of the trail. 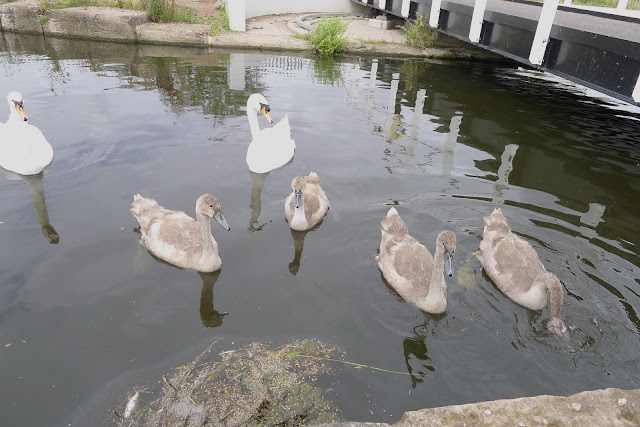 That's all for today, then. I wonder what I will be able to write about next?