Ha, did you think you'd seen the last of me then? I've not really had anything to write about so have just kept doing this and that.

Oh yes, there was one thing. I was invited to visit a friend who has just opened a photographic studio, to have a look at the place. It was a day when his wife had a day off and she was there so we all had a great chinwag. Well, you know what I'm going to say - he said ' nobody comes here without having their photo taken'. So, I'd gone in my nice jumper but I look like the side of a house wearing it. If I'd have thought, I'd have worn something tighter fitting, which would have made me look as if I actually had a shape! Anyway, he took lots of pictures of me and his wife, sometimes one of us individually and some together. I like the ones where I'm not grinning, or looking as if I'm advertising a knitting pattern. Well, a few days later, I looked at Facebook and there is one of the pictures, only it is the front page of a magazine. It was a spoof, and I nearly fell off my chair when I read it, it was so funny. I might put it on here but I'll really have to ask permission as it's not my photo. I am buying some prints as there are some really nice pictures of both of us.

A friend asked me to knit her a hat with a bobble "like the ones the kids are wearing".  Well I have no idea what the kids are wearing but had a look at some of the free patterns and at the people around town. Ah, it's those baggy ones, that look as if they're falling off. Now the problem arises, can't find a pattern! Found a few on Ravelry and other free sites but they all require knitting on circulars. I've never knitted a hat on circulars and then the penny dropped - I would bend the cord and split the hat in half to knit it. Apparently I think it's magic loop, although I thought it was my own idea!

Anyway, I found some lovely yarn, purple pink marled, in a pure wool yarn. It took me a while to do but I took it around the other day and she loved it. I loved it too, and I was secretly hoping she wouldn't, then I could have it!

Here's a photo of it. One of me wearing it (ugh) and one laid flat. 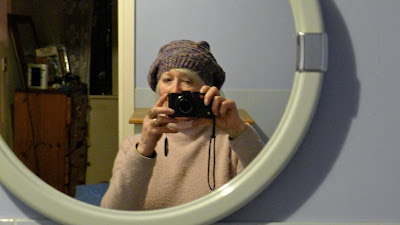 Today, I decided to have a cycle out to the Lavender Barn to meet up with the cycling friends who go there. I've not been for ages, simply because it's been so wet and I get there from my house, across some very muddy terrain, which is really unpleasant on a bike and I end up covered in mud and so does the bike. So I simply don't go when it is like that. Our estate is built on an old Ordnance Factory site, and before it was built on for housing, had to be cleared and because there is a lot of old concrete and wire, I think they imported loads of clay top soil. Strange as it is an area of peatlands.

Anyway, I arrived at the Lavender barn, having cycled across Warburton Bridge, which is a high level cantilever bridge over the Manchester Ship 'Canal. It is having work done and is closed to traffic. Great to cycle over it without cars screaming past me. I chatted to my friends, then cycled back. On the way I was passed by a group of women cyclists, looked to be out on a training ride. I'd love to be as fit as them but as this was my first proper ride of this year, I didn't do too badly.

Came home, and went down to the shopping centre, (in my car I hate to say) to return my library books and choose some more. I have been reading the Susan Hill Simon Serrailler series, very brutal detective/murder/abduction and very un put downable, which is a totally incorrect statement in writing but you will know what I mean. There are about 7 books all written about the DCI, Simon Serrailler, his family and the cathedral town it is based in and around. They are totally absorbing and I find myself writing notes as I am reading, hoping to find out who has DUN IT! She is such a good writer. My friend emailed me and said that she found the first on distasteful! It's a murder book! Sorry, it might be but nevertheless I enjoyed them. I hate seeing violence on the TV though.

Ah, just remembered this cat I knitted for another friend at Christmas. It is quite large and about a foot high. I forgot to do it after I had made it as I was in a hurry. It was knitted with three strands of chunky yarn - and I don't think I'll bother doing stuffed toys again, as there was a problem with the stuffing showing. So I did a make do - 'darned' it in the places showing.

Well, I am now struggling with a scarf called Hitchhiker, which is started at one end, and has 'teeth' and I keep having to undo it as it seems to curl at the beginning, I think I'm doing it too tightly. If anyone wants the pattern, it is on Ravelry, and it's about £3.

Well, that's all today, I hope I might be able to find something more interesting next time.