Well, we watched the final in the Young Apprentice last night. I'm pleased Ashleigh won, I thought she was the best of the bunch of the finalists. The Irish girl, who had such beautiful eyes, was a little too mouthy for my liking. I don't know what we will watch on Thursday nights now, although TH watches Strong Man, I'm not interested in that.

Had a trip to the hospital yesterday for an XRay for the sciatica. Hope there are no major problems and that the physiotherapy I have booked for February will work. I spent a lot of money the last couple of years with acupuncture, which I quite liked but not paying for it.

We went to collect a Land Rover for M in Law on Wednesday. It is a Series III (80s) and on the way back it broke down, with a pin falling out of throttle cable. TH is very much a 'man who can' man and despite not having brought his tool kit with him, managed to find a piece of wire and do a temporary fix. He walked down the road hoping to find the pin, if it had dropped on the road, but that's an impossible task. I must say I was getting pretty desperate sitting in my vehicle, and needed the loo. It was also cold which didn't help. Quick decision, out of vehicle, over a bit of verge, and behind a mere vestige of hedge and - ladies loo! Would any of you have done that? Desperate measures, etc etc!

TH will have to go over to the Isle of Man to take said Land Rover over, on the ferry then probably stay a couple of days and come back. I'll have a couple of days to watch a DVD I want, eat salads and go to bed early and drink wine - ooh, what a treat for a change. And, no, I do not want to go.

Today was our 32nd ? anniversary and, guess what? He forgot! I really couldn't be bothered making a scene and telling him but I'm a bit miserable about it. It seems we are never to celebrate the event mainly due to when it is, it's too cold/near to Christmas to go anywhere, even if he could afford it. Pretty bad timing, hey? I tell you, next time I'll get married in June (hahahaha) Sorry for the moan.

Just this photo, one of my Ebay customers sent it to me, at my request. It is Tattershall castle in Lincolnshire, a place I remember from my childhood. In this photo it looks just like a Camelotish castle, I love the mystique. It is medieval, built of brick and towers above the landscape as it is flat. 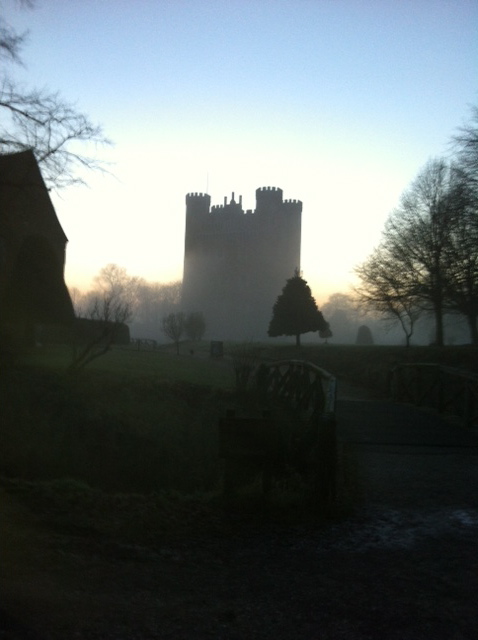 This last one I dragged off the internet. I had completely forgotten what it looked like but it has brought back the memory, it was a strange shape.