I am very pleased that the phone sock my D-i-L asked for is finished and so I can wrap her Christmas present.

I used a mix of Bamboo with a little wool  and the colour is a beautiful magenta-ish shade, don't think the picture is too good as I took it in artificial light. I did alter the exposure and shades but I'm really happy with it and hope she is. I found the button for the centre in my button box, one of a few Mum bought me to use in craft works. No, it just looks burgundy. Think magenta and you might just have it. 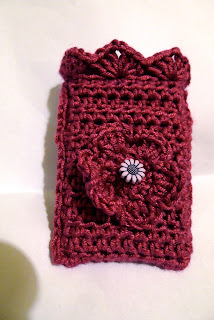 In between cooking some mince I bought to put in the freezer for TH's hot pot, shepherds pie and whatever else is left, I wrapped a couple of presents, finished off my cards and just hope one of my old work colleagues will reply to my email asking for his address. I kept the card from last year for ages but now, when I want it, can't find it. I unfortunately hadn't put it on my card list, as it was a new address. I still get Christmas cards from all my old bosses, from way back to the mid 80s, one I moved to Preston to help him set up an office there when our company was selling part of the company which was a joint venture doing bitumen with Fina, the oil company. I went there for six months, came back and our own company was being bought out by a Venture Capital Company. I'm still in touch with those management now and am chuffed that they still think of me, after all this time. I left in 2000, and the bosses there left before that. All retired now. I always leave it to receive their cards, so they don't think they have to reply to mine!

We've had another lazy day, at least I have, TH has been on his knees (yes) sorting through 12 months bits of paper and putting them in piles. He's got them all in folders now and tomorrow will sort them. I'll give him a hand to do that, although I do have to go to Mum's for a couple of hours. I heated up a quiche from Aldi, very nice too, with some shredded cabbage, onions, peppers, cucumber and capers, mixed with - yes very ordinary salad cream as I didn't have any nice mayonnaise. Very tasty. Then a trifle, just too nice and have managed to leave some for tomorrow.

Think that's all for today, speak to you again.
Posted by Campfire at 10:56