Nothing of note has happened, I've been doing my usual visiting Mum in between other things. She likes to spend as much time as possible in her garden, which rather puts me to shame. She hoes over the garden and rakes up leaves that have dropped up, I hardly ever do that. Also if I go over the garden when it's hot, the soil goes very dry. Her garden is very old established and the soil is wonderful. I think it is probably just to just be doing something. She is 92 and feels as if she has to be busy all the time.

I had a text from my friend who is dog sitting not far from where I live and we went to a local pub and had our tea. It was interesting for her to see some of the old photos of that area, where a road is now where previously it was a row of houses and behind all that was the training centre for the Royal Air Force, Padgate, during the war where recruits would spend time before being deployed to their duties. The sad fact is I remember the old layout very well and can remember either one or two Spitfires at the entrance. We had a really good catch-up and it was lovely seeing her. I miss her company since I retired from where we worked together. She doesn't drive so it's not always easy to meet up.

I've been busy finding stuff to sell on Ebay as I really do need to shed some things. I've sold some trainers, sandals, a tweed jacket, a handbag that had seen better days but had a very good pedigree. All thankfully up to now the ones delivered have had very satisfied customers. I'm selling a gold watch just now, I hardly wear it nowadays, there are lots of watchers but let's see if someone bites tomorrow I've also given stuff to the charity shop, the charity bags that are collected from home and have some items in my boot that a neighbour has given me for our 'Cat Lady' who looks after cats that nobody wants.

The weather has meant I've been fitting other things in when I should have been doing my ranger duties. Thankfully now, there are a few more rangers out there than there were when I was the Co-ordinator. Then I struggled getting others to do jobs for me, it was always the same three people. Now new volunteers have come along and seem to be very enthusiastic. The new co-ordinator however, hasn't even contacted me to introduce himself. I'm a bit miffed about that, as when I commenced I wrote to everyone and then arranged a signpost painting to get people together.

Just posting a picture of some mitts I've made for a friend. 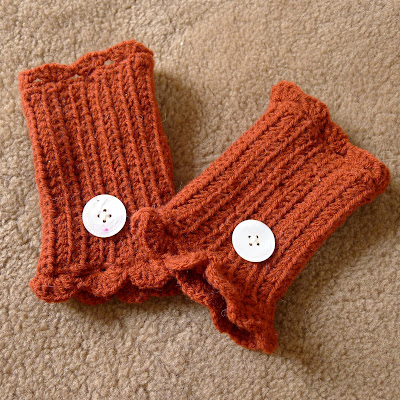 Also a picture of the 'Beetles & Bikes' bit of my blog title, together! That's my vintage bike (1970s/80s) which I am thinking of parting with as I don't use it much. It's a very lightweight one and I MEAN lightweight, even lighter than the bike I used to race one. It has all the original parts apart from new tyres and tubes and the equipment on it is very good quality, typical of the French bikes of that period. I took it out for a little spin the other day and I'm so used to carting shopping around with a heavy pannier on my daily rider, this one just shot up the hills in the park like magic. As you can see the Beetle is also not vintage but classic, and it is 40 years old. 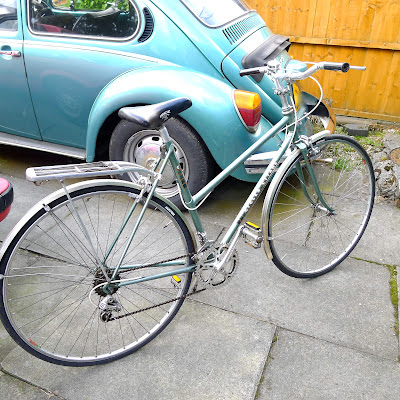 I can't think of anything more to say just now but might show you some photos of some knitting and crochet projects I did at Christmas and if I may say it, was very pleased with them.
Posted by Campfire at 02:12