In a couple of weeks I shall be going over to York for the CTC Cycle Show. I've been going there for more years than I can remember and seen such changes in the content. Previously it was full of earnest CTC old timers who struggled there on their bikes with full panniers and saddlebags, carrying their camping gear. Usually the tent was coffin shaped and everything was very well organised.

Well, you think I did that? Did I heck! When I was a child I used to cycle tour with my parents, in fact all our holidays were cycle touring. We stayed in B & B, which were cheap in those days. Often my Dad refused to stay in a place after being shown a room, as the first thing he did was turn the bedclothes back. In a couple of places the beds were either mothridden, or had never been changed from the last occupants. That was in the 50s. Things far different nowadays.

So, I drive over to York, with my non-lightweight tent in my car. I used to drive in our van and if it rained, slept in it. Since TH sold the van, I am unable to do that, which restricts my bicycle companions to one small folding bike, or if I can be bothered, taking the wheels off my MTB.

It's usually partly hot, partly cold, and partly rainy, accompanied by a strong wind, as we camp on the racecourse, which has got to be the flattest part of York.

Let's hope this year that the weather is warm, dry and with a slight wind only, that means putting up a tent is not so traumatic on one's one.

Here's a little idea of some of the fun bikes you will see at York. I'll post some up to date photos if I find anything interesting. These were by a historic bike  group and I absolutely loved the decorations on them. The last two were such a coincidence, I was parked exactly opposite to the yellow Citroen van, mine was the Maestro van, with my recumbent trike alongside. For those observant ones, note the 'half a caravan' in the background. The owner of that visits every year and he built that. I was camped next to him one year so he always comes and talks to me. Last year, he told me that the van had become unhitched and was damaged beyond repair.

Double click on the pictures, they come up quite large and the flowers/beads look good when the picture is enlarged. 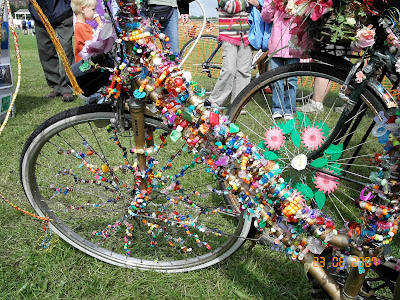 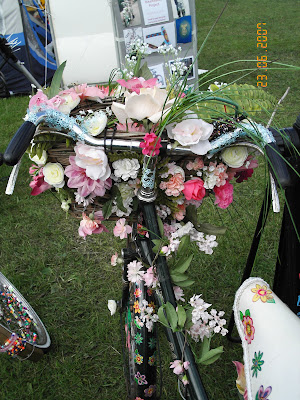 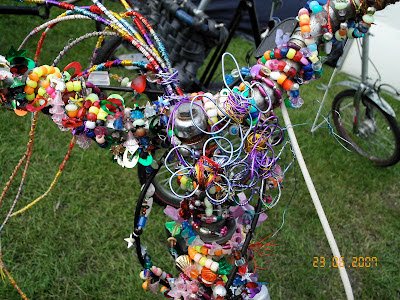