A SHORT BIKE RIDE ALONG THE TRANSPENNINE TRAIL

Today I did a much overdue audit on the Transpennine Trail. I am a volunteer ranger and cover an area from Hale Village, close to Liverpool Airport, to Heaton, near Lymm, Cheshire, although not all at the same time. I've not done a great deal of trail work recently due to needing to spend a little more time with my Mum and also the bad weather. I am a wimp when it comes to cycling in the rain.

The weather today was absolutely gorgeous but the fairly strong North West wind made me glad I'd got a light jacket on. I only covered an area from Latchford Locks, just outside Warrington to Lymm and return. The Ranger's cabin at Lymm was shuttered, so I couldn't have a talk with the rangers there.

Crossing over the Manchester Ship Canal made me think what a magnificent structure it is. The locks used to have large boats sailing down from the port of Liverpool to Manchester docks. Nowadays there are very few boats, apart from a few cargo ships and in summer there is a daily cruise ship which covers the whole of the canal. I would like to do that trip but it takes quite a long time.

At Latchford locks used to be Richmond Gas Stoves company (New World Cookers), I used to work there for the Production Director many years ago. It is now housing. The whole side is full of houses with small gardens, where once hundreds of men and women earned their livings. Part of my job was to go around the factory collecting production figures and I learned not to get embarrassed when the men cat-called. It was of course a dirty and old factory but still employed a large percentage of people from that area. It became Ti New World Ltd, then became absorbed by Stoves who closed it down and sold the site.

Anyway, I looked forward to cycling along the trail but found because of the dampness of the trail, surrounded by trees as it is, there were so many flies I had to keep remembering to keep my mouth shut (difficult I know) otherwise I'd be eating them. 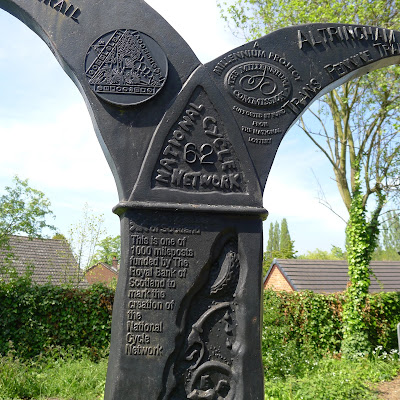 Just showing you a few photos of the locks and the trail. The railway bridge shown last, reminds me of the bridge in the film The Cassandra Crossing. It is now unused but the bridge is such a work of engineering.

It was my Mum's 92nd birthday on Saturday and she was happy with her few presents, I always make her up a few parcels as she likes opening them. For her birthday card I found a photo of her when she was in her late 20s, sitting on a gate, very stylishly, enlarged it and put it into one of those cards with a hole in it. She was thrilled to bits. I called again at her house on the way home for a welcome cuppa and of coure a piece of cake.
Posted by Campfire at 15:19